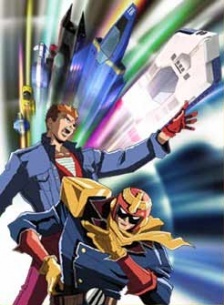 Use you heart and BOOST FIRE!

F-Zero: Falcon Densetsu (F-Zero: Legend of Falcon) is a 2003 anime based on the F-Zero series of games, but set in an Alternate Continuity. In the U.S., it aired as F-Zero: GP Legend as part of 4Kids Entertainment's "Fox Box" slate of Saturday Morning Cartoons, but only 15 of the 51 episodes aired before the series was cancelled.

It's the year 2201. Mankind has already made big achievements in space, and the scientific civilization is developing more and more!

The difference between rich and poor has become vast! Naturally, this causes conflicts! In the whole universe, people are being crazy about personal use machines that are used in Highspeed-Races, called F-Zero.

With their loud racing machines, they are competing on race tracks located everywhere in the universe for the title of the universe's fastest driver. It is the future's F-1-Race! Reckless pilots from every part of the universe gather around to fight for the prize-money and the highest honour achievable.

Among these pilots the newcomer Ryu Suzaku and the mysterious masked Captain Falcon are the most popular ones. Each race they jostle in order to win, which always ends up in a violent fight.

But Ryu, being on the top of his fame, has yet another face...

In the year 2051, Ryu Suzaku worked as a police detective and got into an accident whilst a mission, got incurably hurt and put into artificial coldsleep. 150 years later he is rehabilitated and given a new live by the military forces.

He works secretly for the "Milky Way Police" in order to capture a criminal organization that wants to get hands on the extremely high F-Zero Grand-Prix Money. Ryu has suddenly lost his own life.

However, Zoda, the criminal that caused the accident a 150 years ago, is revived in this time and Ryu, who knows about his secret moves he is using, now for the second time, now in the F-Zero-Races, decided to participate for his squad.

The anime contains examples of the following:

Falcon sacrifices himself against Black Shadow with the Falcon Punch.

Example of:
Dying Moment of Awesome

Falcon sacrifices himself against Black Shadow with the Falcon Punch.