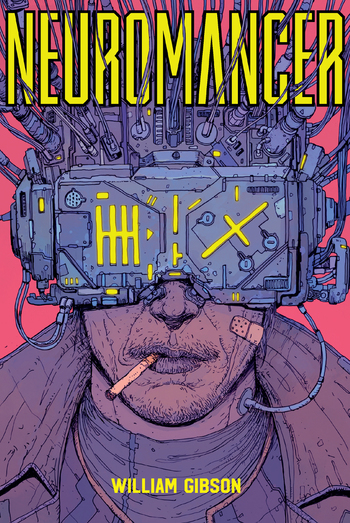 "The sky above the port was the color of television, tuned to a dead channel."

A 1984 noir novel by William Gibson, and Trope Codifier for an entire generation of Sci-Fi stories. Neuromancer is the primary example of Cyberpunk alongside Blade Runner, showcasing the cynical use of technology so characteristic of that genre. Most modern stories related to Cyber Punk, Cyber Space and related tropes can be largely traced back to this one story. It is also the first of Gibson's famous Sprawl Trilogy (followed by Count Zero and Mona Lisa Overdrive).

Henry Dorsett Case was a "console cowboy", a hacker for hire in the dystopian future city of Chiba, Japan. During a job, his employer caught him stealing, and retaliated with a mycotoxin that destroyed his ability to jack into the matrix. Now, he's a useless waste of space on a self-destructive course — until a mysterious Street Samurai by the name of Molly shows up to hire him for one more job.

Molly turns out to have some of her own skeletons in the closet, and her own backstory intertwines with Case's disjointed adventure of drugs, self-destruction, hazy sex, virtual reality, Techno Babble and really cool ninja fight scenes.

Neuromancer has been compared to impressionist Beat poetry. When it first came out, very little of the lingo used in the narration made sense to the target audience. The fact that it's somewhat easier for a modern day reader is solely because fiction writers and scientists alike started using Gibson's words for actual things.