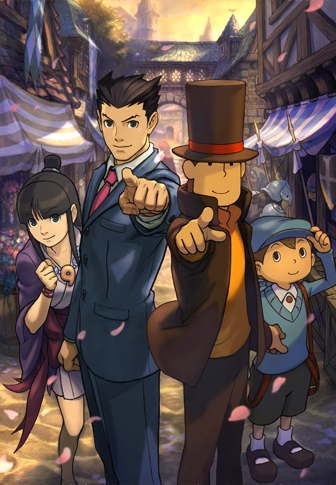 Something strange is going on in the city of Labyrinthia. The townspeople live in fear of witches and magic, and celebrate the "Storyteller", an enigmatic figure whose writings become reality.

In a courtroom deep within the city, a young girl stands trial for witchcraft. The inquisitor (the town's equivalent of prosecutor), a dapper gentleman with a top hat, accuses her of being the witch that has brought havoc to the city.

Across the room, the defense attorney smirks and taps a sheet of paper, then stands.

"OBJECTION! Professor, there is a huge contradiction in your argument!

So goes the story of Professor Layton VS. Phoenix Wright: Ace Attorney, a Nintendo 3DS title by Capcom and Level-5. A Crossover between the jaw-droppingly popular Professor Layton puzzle games and the extremely well-written Ace Attorney courtroom adventure series, VS seeks to combine the two playstyles, warning that "this time, the puzzles are filled with contradictions".

The game has two official websites, courtesy of Nintendo Australia