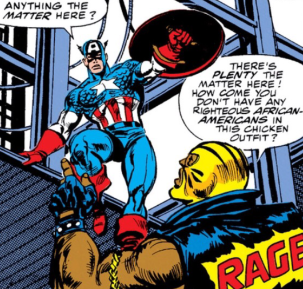 "You know what the most dangerous thing in America is, don't you, Lamar? A nigger with a library card."
— Brother Mouzone, The Wire
Advertisement:

A stock character and stereotype popular in the 1970s–1980s. A male black youth, the Angry Black Man knows that The Man is out to get him and that the Revolution will soon come and whitey will have his back against the wall. The Angry Black Man sees injustice everywhere and is capable and intelligent but usually financially destitute because the damn Honkies won't hire him to give him an opportunity.

Liberal white people will attempt to befriend him, but he will have none of it, seeing even being friends with white people as a betrayal to his race without realizing the hypocrisy of this logic.

Not quite a Dead Horse Trope, because while society has mostly marched on through affirmative action and other policies intended to help black Americans get ahead in addition to even electing a black man President, this behavior is still prevalent within the black community as ancient culture is near-impossible to track due to the dilution of cultural traits during the slave trade. Jazz musicians and other historical greats like Muhammad Ali and Jackie Robinson, while talented, mostly only matter to people today in the context of rebelling against the historical oppression of their people. There were few black heroes that weren't rebellious in some way, leading some black youths to try to emulate them despite living in far better conditions and even lambast those who rebel against their rebelliousness for "acting white".

Oh, and despite the name, this trope is not about characters who are black and have a Hair-Trigger Temper (see Scary Black Man for that). Compare Malcolm Xerox. Compare and contrast Angry White Man. In South Asia, the equivalent is the Angry Tamil Man.