The protagonists and rivals of Pokémon Red and Blue, Yellow, FireRed and LeafGreen, and Pokémon Let's Go Pikachu! and Let's Go Eevee!. 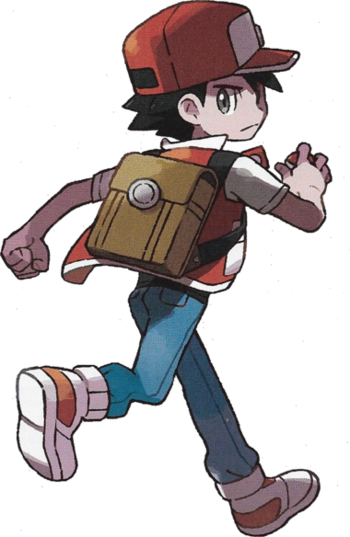 This young man is perhaps the most iconic human character of the series. An 11-year old from Pallet Town who used to be the best of friends with a boy named Blue. At the start of Pokémon Red and Blue, Red and Blue are given a task by Professor Oak, Blue's grandfather and the local expert on Pokémon: to travel around the Kanto region and capture all 150 known Pokémon to complete the Pokédex, a device that records data on Pokémon encountered and captured. To help with this, Oak gives Red and Blue one Pokémon each from Oak's remaining three. (In Pokémon Yellow version, Red's starter Pokémon is a Pikachu that Oak captured on Route 1). With this one Pokémon, Red ventures far from his home town, challenging the various gyms and thwarting the operations of the criminal enterprise Team Rocket in order to become a Pokémon Master.

In Pokémon Red, Blue and Yellow, he was the only player character, and is still the only protagonist to appear in later games in person. He's the strongest trainer in Pokémon Gold and Silver and can also be battled in Pokémon Black 2 and White 2, Pokémon Sun and Moon (original and Ultra), and Pokémon Let's Go, Pikachu! and Let's Go, Eevee!. Red's design also appears as a character in Super Smash Bros. Brawl and Super Smash Bros. Ultimate, in which he commands Squirtle, Ivysaur, and Charizard to battle for him. Super Smash Bros. for Nintendo 3DS and Wii U features Pokémon Trainer as a trophy, and expressly states that Red and the Pokémon Trainer from Brawl are one and the same.

Red has appeared in many spin-off media, most prominently Pokémon Adventures. In addition, the lead character of the main anime series shares his name with one of Red's default names (Ash in English and Satoshi in Japanese). 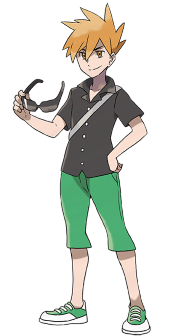 Voiced by: Erik Kimerer (Pokémon Generations - EN), Jun Fukuyama (Pokémon Generations - JP); Billy Kametz (Pokémon Masters - EN), Ryota Ohsaka (Pokémon Masters - JP)
"I'm moving on up and ahead! By checking my Pokédex, I'm starting to see what's strong and how they evolve! I'm going to the Pokémon League to boot out the Elite Four! I'll become the world's most powerful trainer! ...well good luck to you! Don't sweat it! Smell ya!"

The Rival of the Player Character in Red and Blue. He was once the player character's best friend, but as he grew up he changed into a huge Jerkass. Though abrasive and cocky, he has the skills to back up his boasts and has set his sights on nothing less than becoming the Pokémon League Champion. After being defeated, he takes up the position of Viridian City's Gym Leader.

When Pokémon Red and Blue was remade for the GBA, the games went through some drastic changes. One important change that the GBA games brought about was the ability to choose between a male or female protagonist. For some time, the closest thing she had to a Canon Name was "Leaf". note Taken from datafiles, and canonized by a promotional statuette in Japanese and an appearance in Masters. As the female option for the Player Character, her backstory is roughly the same as Red's: a child from Pallet Town who was given the task to catch them all for the Pokédex and To Be a Master. She would also appear in Super Smash Bros. Ultimate (in her FireRed/LeafGreen design) as a female option for the Pokémon Trainer character opposite of Red. 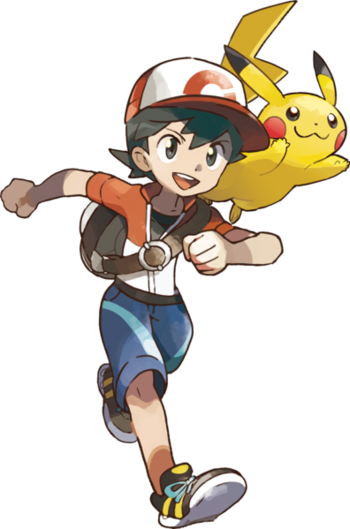 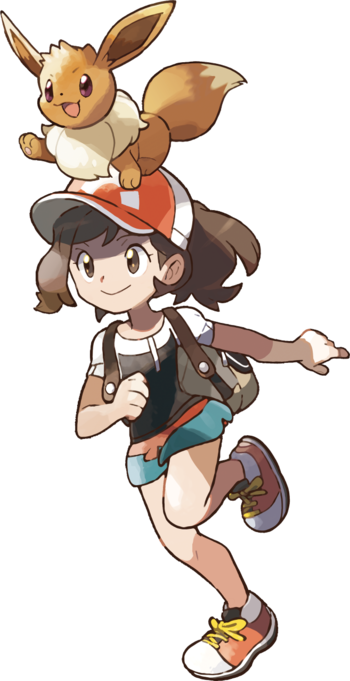 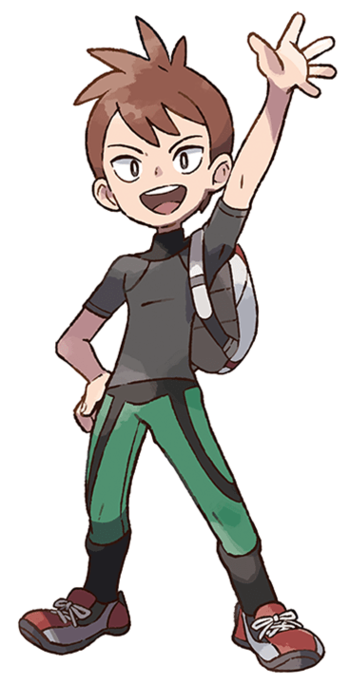 The rival for Pokémon Let's Go, Pikachu! and Let's Go, Eevee!. While he's similar to Blue in role, he's much less confrontational.

The second character based off of the unused female protagonist from Red and Green.

Leaf's origins are a bit older than the remakes suggest. She's based on a female trainer seen in early artwork for Red and Blue, who was left unimplemented because of memory limitations. The Kanto trio would finally be fully rounded out when Let's Go introduced Green alongside Red and Blue, using a design similar to her originally planned appearance, and under the name Green to match her counterparts. Despite being similar looking to Leaf and fulfilling the same role, they are not the same character and have different Canon Names.