Aloy of the Nora / Despite the Nora 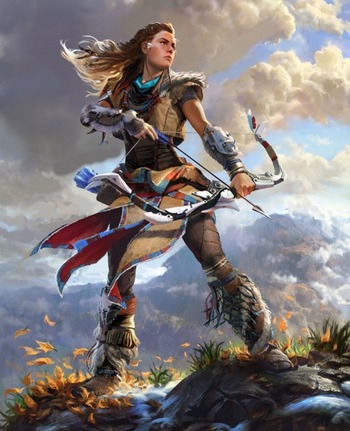 "Where the trail leads, I will go."

Aloy is the protagonist and player character of Horizon Zero Dawn and Horizon Forbidden West. Born to the Nora tribe, she was exiled as an infant and raised by Rost, another outcast. As a child, she fell into a lab from the Metal World and found an earpiece called a Focus, which allows her to scan the world around her. She begins her adventure by participating in the Proving in order to become a Brave and find out what happened to her mother.

open/close all folders
A — F
(in a dust storm) "This storm will back down before I do."
Advertisement:
G — N
O — Y