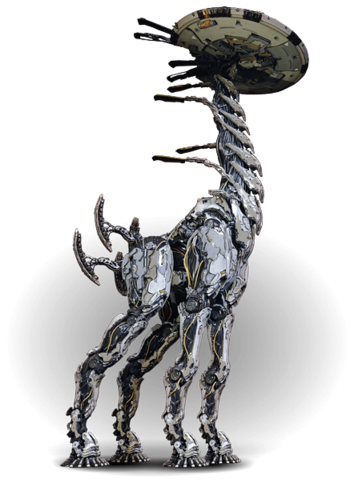 Machines that are at LEAST as tall as a five-story building (judging by nearby ruins), if not taller. Players have compared Tallnecks to giraffes or long-neck sauropods such as Brachiosaurus, Apatosaurus and Brontosaurus. 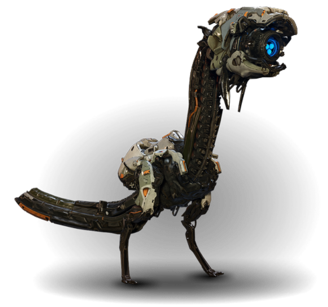 One of the first machines seen in the game. They often act as sentries to other groups of machines, warning them and then attacking the threat as a first line of defense. Watchers could be compared to the Theropoda order of dinosaurs, with their large hind legs (they're basically Velociraptors, just without the forelegs). 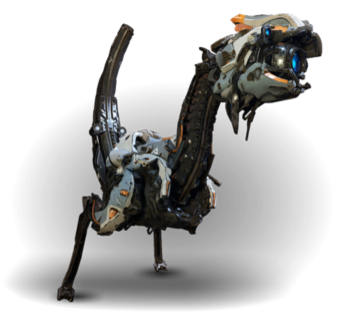 An upgraded version of the Watcher, it has heavier armor and replaces its glare attack with a laser. 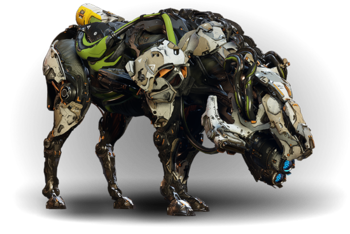 One of the first machines in the game, both to hunt and to ride. Resembles a horse in looks and behavior, and often moves in packs with other Striders. 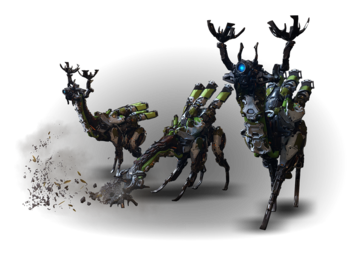 A generally docile machine that resembles a deer thanks to its antlers, its habit of grazing in packs, and its fleeing-from-hunters skills. 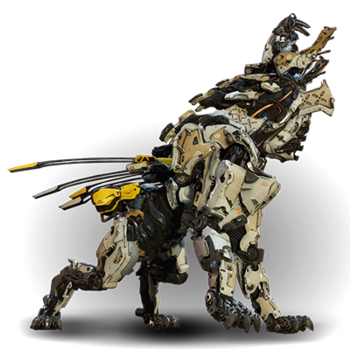 One of the first "aggressive" machines that will attack humans on sight. The appearance of Sawtooths are very similar to big cats, like saber-toothed tigers. 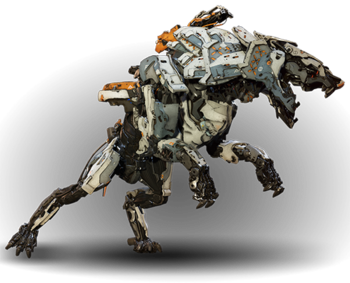 A larger, more heavily armed and armored version of the Sawtooth. 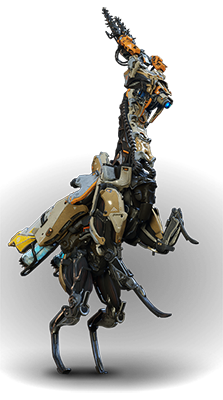 A machine that resembles an antelope. 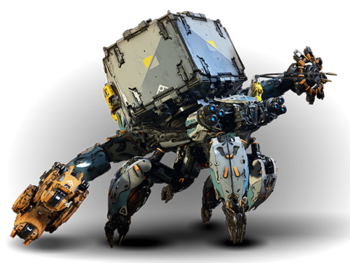 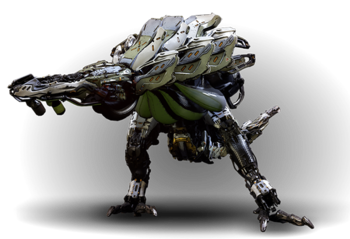 A machine that resembles a large theropod dinosaur. It has a large liquid storage container on its back (hence the name) that contains either highly flammable or highly endothermic liquid that it sprays out as an attack. 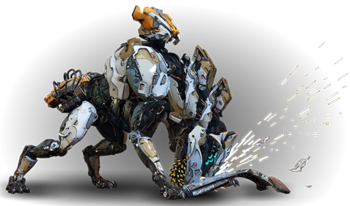 A large, four-legged machine that mirrors a hyena in both looks (long, spindly legs and dog-like appearance) and behavior (often found at carcasses of dead or destroyed machines). 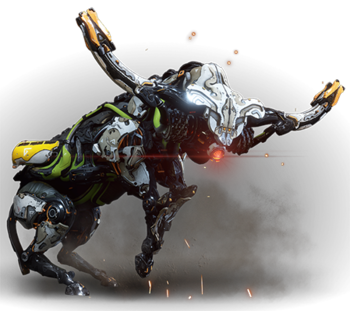 A machine with the horns of a bull. Can be ridden like a horse. 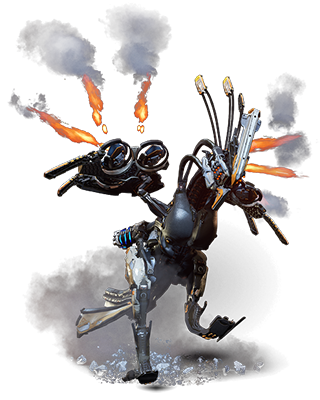 A machine that resembles a large rooster, or possibly a feathered dinosaur like an Oviraptor. 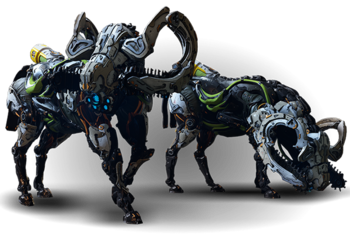 A machine that resembles an oversized bighorn sheep. Like the Strider and Broadhead, it can be ridden.
Snapmaw 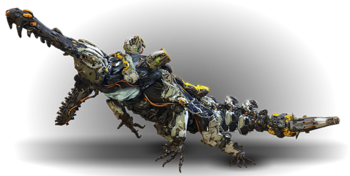 A machine that resembles a member of the Crocodylidae family (crocodile, alligators, caimans).

A cougar-like machine with a cloaking device, long-range lasers, and proximity mines. 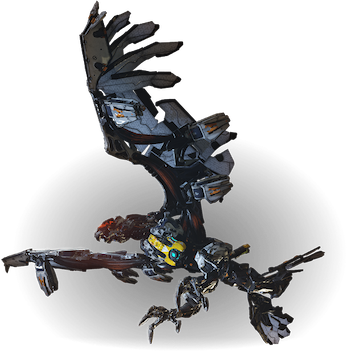 A large machine that looks like a bird of prey. Its electricity attacks channels the mythical Thunderbird. 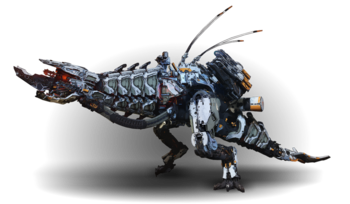 A giant machine that resembles a Tyrannosaurus rex. 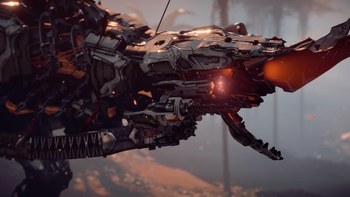 The only named Thunderjaw and general machine in the story, and for good reason. 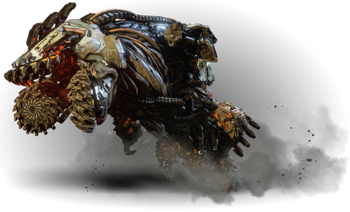 A burrowing machine that resembles a giant mole or burrowing lizard. 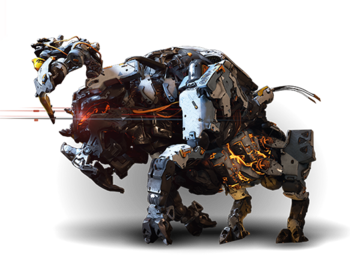 A machine that resembles a giant bison. 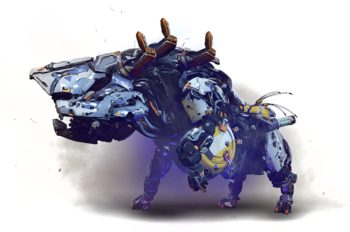 A massive transport-type machine that resembles a rhinoceros. 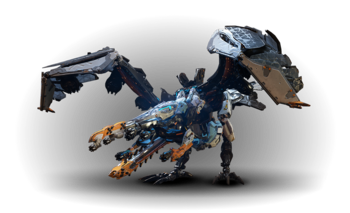 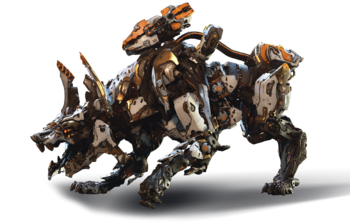 One of the machines endemic to the Cut, it resembles a giant wolf or hyena and is the first encounter after you enter the eponymous Frozen Wilds.
Frostclaw 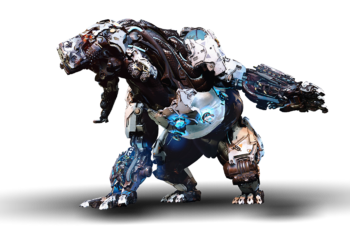 A type of machine found in the Cut, it resembles a grizzly bear.
Fireclaw 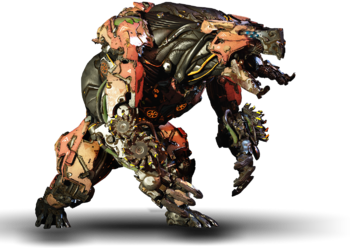 An experimental prototype alternative model of Frostclaws powered by magma. Mostly the same as Frostclaws, but stronger, faster, and uses fire attacks instead of frost.
Corruptor/FAS-ACA 3 Scarab 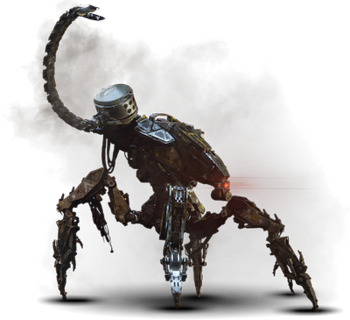 Highly dangerous machines that can override more docile machines (like Striders) and make them attack humans. The corruption from these machines can also harm organic life by poisoning it. 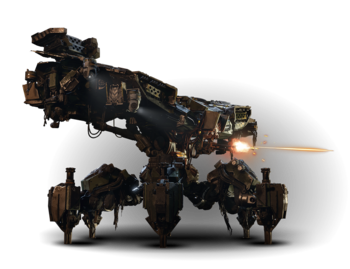 Deadly machines that pack a ton of weapons and firepower. 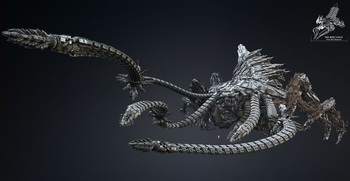 Huge machines that were designed to produce and lead hordes of Deathbringer and Corruptor armies in war.