Back to the main HISHE characters page.

Marvel Comics characters appearing at the Super Café in the web animation series How It Should Have Ended. They are largely based on their film versions. 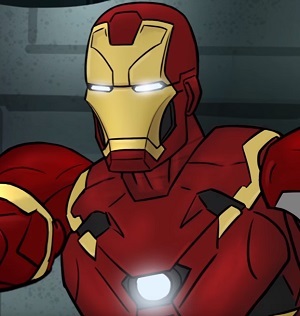 The genius billionaire playboy philanthropist, CEO of Stark Industries, and superhero with a Powered Armor. His first appearance at the Super Café is the moment viewers realized that the café isn't just for Superman and Batman. 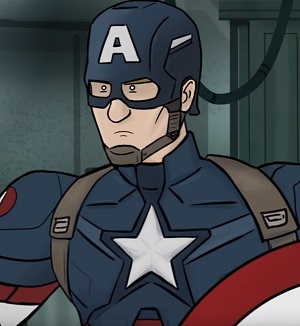 The WWII hero that was always just kinda there until winning over the fans with The Winter Soldier. 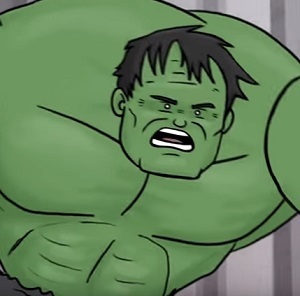 The nuclear physicist who turns into a large green monster when angry. Only this one is a lot friendlier, most of the time. 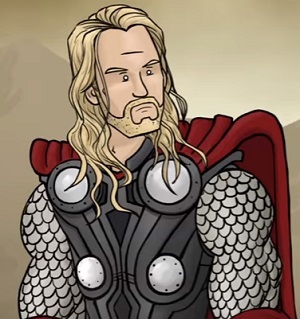 "At least I have a father!"
Voiced by:

The other Asgardian guy besides Loki.

One of Marvel's most well-known properties, everyone's Friendly Neighborhood Spider-Man(s). He was kept out of the Marvel Cinematic Universe for years, but that's history now. As Spidey is the most rebooted superhero in recent movie history and since the show's drawing style evolved, he's had quite a few different HISHE iterations over the years (and they can all show up in the picture at the same time). 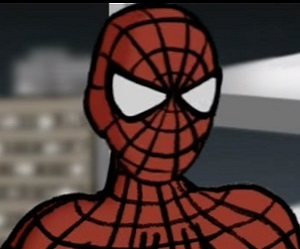 "Seriously? You're rushing here like you can take ME?! This is my third movie! 'Spider-Man Tres', amigo! You think you're gonna kill me off?!"
Voiced by: Victor Van Scoit

The Spider-Man of Sam Raimi's Spider-Man trilogy, as played by Tobey Maguire. 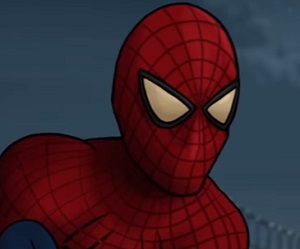 "I'm actually kind of busy all of a sudden but... I'm sure they'll be fine!"
Voiced by: Daniel Baxter

The Spider-Man of Marc Webb's The Amazing Spider-Man films, as played by Andrew Garfield. 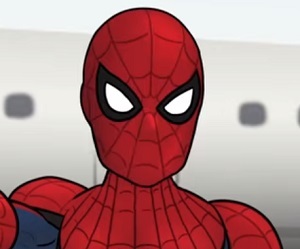 The Spider-Man of the Marvel Cinematic Universe (MCU), as played by Tom Holland. 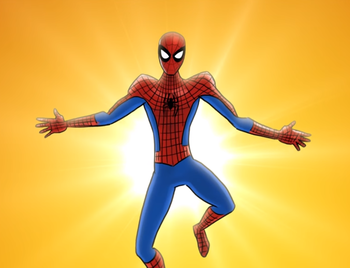 "Alright, let's go through this one more time."
Voiced by: Daniel Baxter

The first Spider-Man of Miles Morales' universe, as voiced by Chris Pine. He claims to be the all of the above Spider-Men. 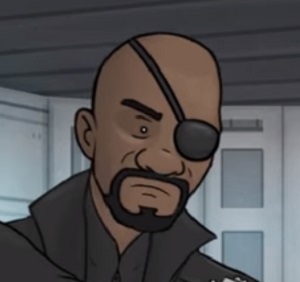 "I say we ain't callin' the Avengers!"
Voiced by: Adrian Neely

The badass (now former) director of S.H.I.E.L.D. and the man behind the creation of the Avengers.

The Guardians of the Galaxy 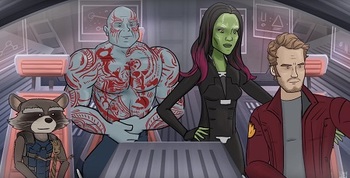 "Little bit of both!"
Voiced by: 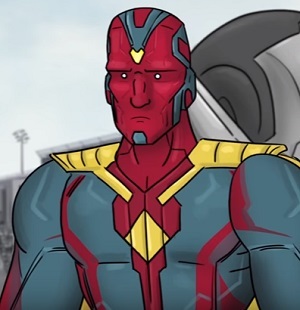 "Do you want to ask me if I bleed?"
Voiced by: Daniel Baxter

Ultron's creation who ended up being used against him, and a new member of the Avengers whose set of powers sounds quite familiar to someone at the Café. 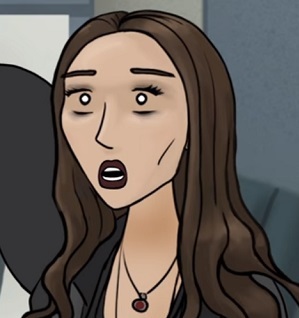 "Can you imagine if you let big Ultron get away for just a little bit longer?"
Voiced by:

A new member of the Avengers who can't be called a "mutant". 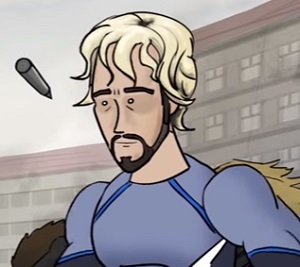 A new member of the Avengers, a speedster who not only can't be called a "mutant", but is the version that's not the fan-favorite Breakout Character of the X-Men movie franchise. 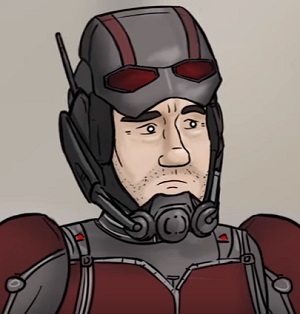 "Yeah, they didn't even need me when you think about it..."
Voiced by: Jon Bailey

The size-shifting superhero... whose presence wasn't really necessary in his own movie. 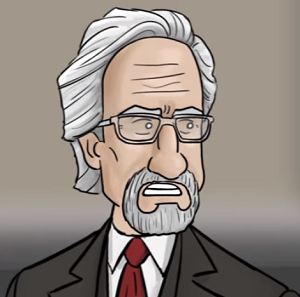 "Have you seen Mission Impossible? It's got Tom Cruise and everything, it's a very exciting picture!"
Voiced by:

The retired first Ant-Man and inventor of the Pym particle. He loves complicated plans. 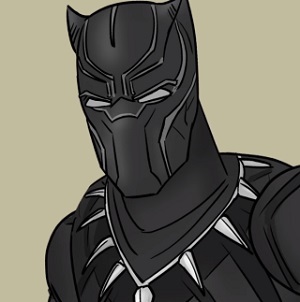 "I believe I would prefer to be on Team Captain America!"
Voiced by: Jon Bailey (Civil War), Azerrz (Black Panther, Infinity War) 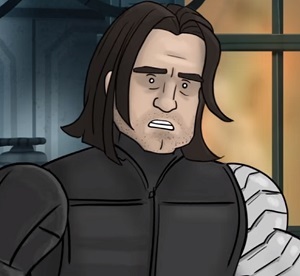 Steve Rogers' long-lost friend. HYDRA brainwashed and kept him in cryostasis, turning him into a Super Soldier. 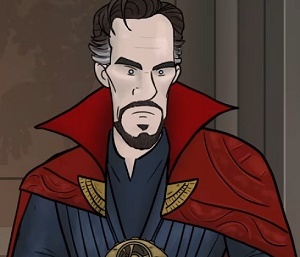 "Ah, yes... if only we had a device that could reverse things that are damaged..."
Voiced by:

After the Career-Ending Injury that ruined his hands, Stephen Strange became the Master Sorcerer of the MCU.

A classmate of Peter's who keeps a close eye on him and his activities. 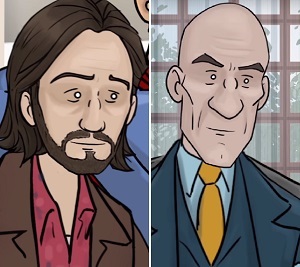 "Welcome to my school for gifted youngsters!"
Voiced by:

The powerful telepathic mutant who founded the X-Men, and the benevolent headmaster of his School for Gifted Youngsters. 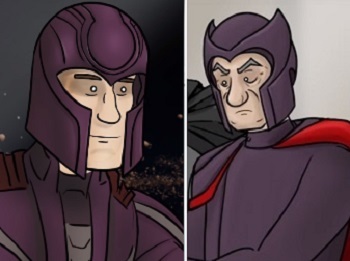 "And sometimes we play chess with real people's lives in the balance."
Voiced by:

The metal-controlling mutant. Since he has been portrayed both as an Anti-Hero and an Anti-Villain, he can be seen at both the Super Café and the Villain Pub. 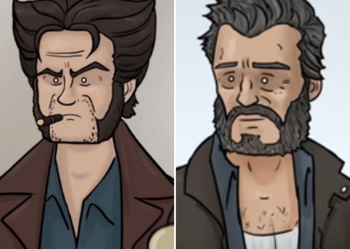 The regenerating mutant who needs no introduction. 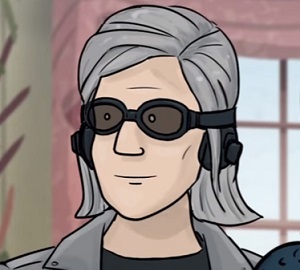 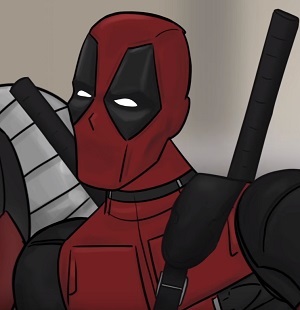 "Hey, can I get some chimichangas?"
Voiced by: John Tillman 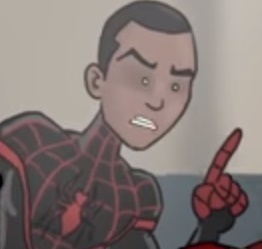 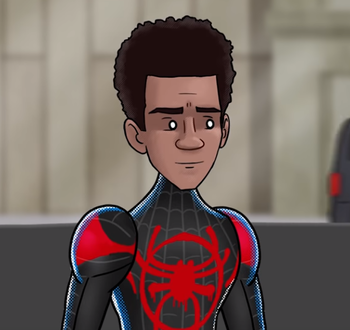 "Yeah, don't be too sure about that!"
Voiced by: Chase Mack

An Afro-Latino teenager and the second Spider-Man of a reality where Peter Parker died in battle. 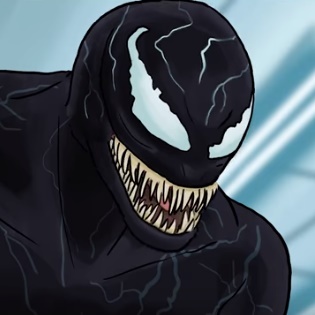 A sapient symbiotic lifeform that bonds with a human photojournalist named Eddie Brock.