What Could Have Been
aka: What Might Have Been 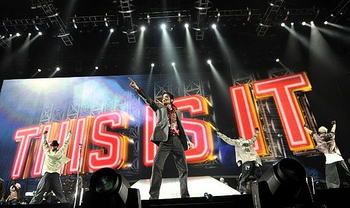 This was going to be his final concert tour.
And then he died.
"For of all sad words of tongue or pen,
The saddest are these: 'It might have been!'"
— John Greenleaf Whittier

This is when directors or writers release details about plots, characters, backstories, or other elements they thought about adding to the story at one point but ultimately never did. Unlike All There in the Manual, however, this new information is not released as Word of God with the intention of being added to the Canon. These elements are only What Could Have Been but never were and never will be part of the story proper.

Some may quickly find a home in Fan Work. Many fans love hearing the possible paths their favorite story could have taken... even while breathing a sigh of relief (or feeling disappointed) that they ultimately didn't come to be.

This can also refer to a Sequel Hook that never got a payoff, alternate casts or directors, or even tantalizing news that the entire story was completely different from the one we all know, when it was first conceived.

Just a few typical reasons for why stories get altered along the way:

A good place to find What Could Have Been is in DVD Commentary and out-of-continuity pilots used to pitch a show.

Keep in mind that Tropes Are Tools and that the ideas and concepts implemented into the final product are sometimes better than What Could Have Been.

See also The Other Marty, Vaporware, Development Hell, Dummied Out, Mid-Development Genre Shift, and Uplifted Side Story. Contrast with Offscreen Moment of Awesome where a particularly grand moment is seemingly perfectly set up to happen but then isn't seen, and They Wasted a Perfectly Good Plot for when they used an awesome idea in a less than ideal way. Occasionally something that was removed survives in another part of the series, then it is Refitted for Sequel.

Have in mind that, although the name may suggest otherwise, this trope is for divergent aspects of the work which were actually considered by the creators in the real world. A story (usually not canon) that takes the plot of an older story, alters a detail and shows how such change would have made things play out differently is a What If?. If you want to discuss how the work could have been better if some detail was different (with that detail being just your own idea), start a Wild Mass Guessing.

For further reading, see the TV Moments That Never Happened

thread at Television Without Pity, the Original Vid Junkie's "Never Got Made" files,

and the "Movies that Never Were" series at CHUD.com, the links for all of which are included in this lost movies entry.

This subject has also been covered by The Onion A.V. Club here