Metaphorically True
aka: From A Certain Point Of View 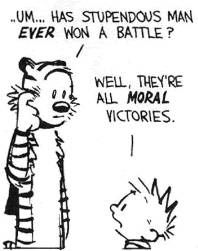 This trope occurs when a statement is clearly false — at least according to the most obvious meaning of the words — but in a non-literal sense it could be considered true. The justification for calling it 'true' generally hinges on a shaky technicality which most people would not consider valid (e.g. the statement "Japan conquered the world" is clearly false in any literal sense, but Japanese culture is very popular worldwide, which you could say is a form of conquering). One way to make this trope work is to play with the Exact Words, but particularly bad cases may require a Personal Dictionary or outright Insane Troll Logic.

This is most commonly used by oracles who are trying to create a Prophecy Twist but haven't sufficiently mastered the art of double meanings. Instead of taking advantage of a non-obvious but genuine ambiguity of phrasing, or relying on elaborate symbolism, the oracle takes an unambiguous statement and tries to pretend that there was another valid meaning. It is also what separates a Literal Genie from a Jackass Genie, as the latter stretches the interpretation of the wish beyond the bounds of credibility just to screw the wisher over. Also often used by The Fair Folk and others who Cannot Tell a Lie. It can be a (questionable) way to Take a Third Option when faced with To Be Lawful or Good in the form of whether to tell the truth if it causes harm.

Less commonly, it is used in the wake of a Retcon, in an effort to smooth over the inconsistencies introduced by said retcon. A particularly infamous example occurs in the Star Wars movies, where, "Darth Vader betrayed and murdered your father" was pronounced true "from a certain point of view" in the third film, even though in the first film the line clearly indicated that they were two different men. Nevertheless, George L insists that the metaphorically-true meaning was always what he intended.

This is also likely to come up in a Life-or-Death Question, where it may be that this is the answer that a particularly sadistic or unfair questioner wanted. Often, someone will mention this unfairness, but it usually won't change the outcome.

Contrast Prophecy Twist, in which the alternative interpretation is not anticipated by the characters (and hopefully the audience), but makes sense when revealed. Also contrast Motivational Lie, where a lie or partial truth is seen as justified because it spurred the hero on to success.

Alciel recounts the shared history between him, Emi, and Maou with Suzuki; phrasing the rise the Demon Kingdom and it's collapse by The Hero as though they were in Construction and Real Estate.

Alciel recounts the shared history between him, Emi, and Maou with Suzuki; phrasing the rise the Demon Kingdom and it's collapse by The Hero as though they were in Construction and Real Estate.