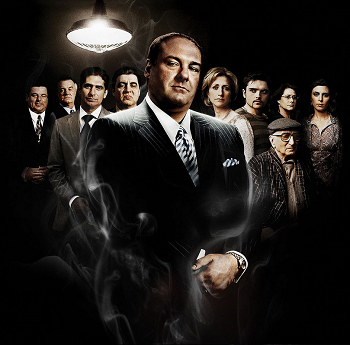 The equal and opposite of the Cop Show and Police Procedural, the Criminal Procedural is a type of Crime and Punishment Series that focuses on people who are on the wrong side of the law, and especially their present-day transgressions of it. Examples often focus on certain types of criminals:

Con Men and Gentlemen Thieves are the most popular, since it's easy to make them sympathetic to the audience by making their victims rich and greedy. They are also usually charismatic and attractive. Their shows are usually light in tone and there will almost certainly be one episode where they actually help the police to take down a violent (and therefore "bad") criminal. There may be a recurring police officer who tries (and fails) to capture the protagonists, or who coerces them into helping him out with his investigations.

Outsiders and Hangers-on are the next rung down on the popularity ladder. Generally petty crooks, fencers, forgers, dealers of soft drugs and other people who are on the wrong side of the law but not sufficiently nasty to put off the viewing audience. Expect the really nasty criminals to pop up more regularly, usually as a plot device if the protagonists owe them money/drugs/something else. The outsiders are usually cowardly or otherwise non-violent. These guys typically star in dark comedies.

Hardcore/Organized Criminals are the least popular protagonists for Criminal Procedurals, largely because they have to be shown to be despicable people in order to come across as being remotely realistic though occasionally they will have their Pet the Dog moments, especially among the more sympathetic gangsters. It's also difficult to play down the crimes that they commit: murder, extortion, dealing in highly dangerous drugs, etc. As a result, such series tend to be very adult in tone and morally complex, and therefore not attractive to advertisers. Where there is humour, it tends to be pitch black. The "Rise and Fall" Gangster Arc is commonly found here.

Convicts and Prisoners do not fit comfortably into the popularity ladder. This is because, since they have been taken off the street and are (in theory) paying for their crimes, they don't necessarily have to be shown committing criminal acts. Or, when they do commit such acts, they are usually in flashbacks, as a part of the convict's origin story - or against fellow inmates, which attacks can be seen as justified to some viewers. As a result, series set in prison can have wildly different tones, from harrowing to comedic.