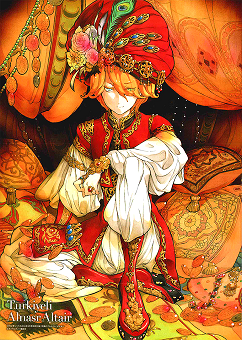 A historical fantasy manga set in a fictional 15th century Europe caught between the Türkiye Stratocracy to the east and the Baltic and Rhein Empire to the west. Our hero is Türkiye's youngest elected pasha in history, 17-year-old "Tuğril" Mahmut, a pacifist who must do everything in his power to prevent war between his homeland and their hostile neighbor. Although the scope of the story is small at first, it soon expands into a diplomatic struggle involving the entire continent.
Advertisement:

Shoukoku no Altair (released by Kodansha as Altair: Record of Battles) is an ongoing series written and illustrated by historian Kato Kotono, which began publication in Shonen Sirius magazine in 2007. A spin-off, Toukoku no Subaru, set in the far east of the same world, and illustrated by Kato Chika was serialised from 2016 to 2019.

Has nothing to do with the character from Assassin's Creed.

A two cour anime adaptation by MAPPA aired July to December 2017, and it can be watched on Crunchyroll. Here's the official website.

open/close all folders
Tropes: A to M
Tropes: N to Z