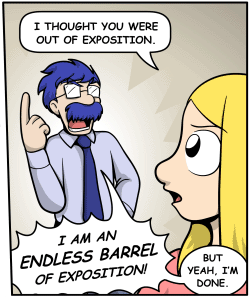 "I know! That's what I told 'em, but no! All the cruddy exposition goes to me! I've got to talk and talk and fiddle with the computer and talk some more and fiddle and talk! I feel like Obi-Wan cruddy Kenobi!"
— Roddy MacStew, Freakazoid!

See also Captain Obvious, Expositron 9000, Haunted House Historian. The Combat Commentator is a variation that provides color commentary for ongoing fights. Not to be confused with Ms. Fanservice, though the comparison could make for some interesting puns.

Some random guy explains to Paige some important details during the City Counsel Contract Committee Meeting.

Some random guy explains to Paige some important details during the City Counsel Contract Committee Meeting.