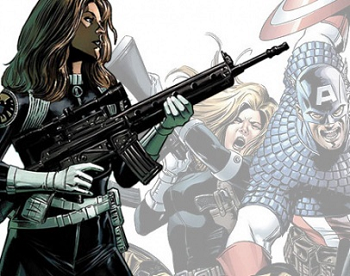 Agent 13 (aka Sharon Carter) is a Marvel Comics character created by Stan Lee, Jack Kirby and Dick Ayers. She is best known for being Captain America's love interest and the original S.H.I.E.L.D. lady agent.

She first appeared in Tales of Suspense #75 (March, 1966). In her initial appearance, Sharon was involved in a conflict between SHIELD and AIM. A fellow agent of SHIELD had managed to steal powerful explosive "Inferno-42" from the terrorist organization. He passed it on to Sharon for safekeeping, while AIM hired Batroc the Leaper to go after her. Cap accidentally got involved in the conflict, following Sharon around due to her supposed resemblance to one of his Love Interests from World War II. Subsequent issues of this storyline established that Sharon is actually the niece of said love interest, Margaret "Peggy" Carter, and that Sharon herself is quite capable of outmaneuvering opponents.

Sharon was soon developed into the main love interest for Cap. In issue #95 (November, 1967), Cap revealed his Secret Identity to her and offered his marriage proposal. Sharon turned down his offer, pointing out that she is already married—Married to the Job, that is. She continued to serve as a regular supporting character until Captain America vol. 1 #233 (May, 1979). There she is forced to commit suicide as part of a plot by hypnotist Doctor Faustus. That was supposed to be the end of the character, and she remained dead for nearly two decades, until she turned up quite alive in issue #445 (November, 1995), courtesy of writer Mark Waid. Sharon was Faking the Dead for years, and her return was part of a major storyline of the time.

Sharon has remained a prominent character in books featuring Cap and/or SHIELD since The '90s. Most of her key storylines have been written by Mark Waid and Ed Brubaker. She co-starred with Nick Fury in the mini-series "Fury/Agent 13" (1998) and became a part of the black-ops team Secret Avengers in 2010.

She was seemingly killed off again by Cap writer Rick Remender, shortly after proposing to Steve, but she ended up surviving, along with Steve's adopted son, Ian. However, she was in Dimension Z, where time is wonky, and she's aged enough for it to show on her face. With Steve losing the serum and looking every one of his ninety-some-odd years, they've decided to take a well-earned break from fieldwork, although they continue to work logistics for the Avengers.