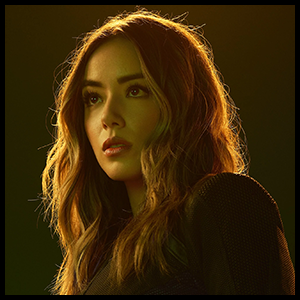 "With great power comes... a ton of weird crap you are not prepared to deal with."
Advertisement:

"The one thing that I don't need time to understand is that we are all in this together. I tried to take the blame for everything not too long ago. I dyed my hair, I ran away. I thought that separating myself from the team would help me protect it, but in truth, I kind of just lost myself."

A civilian hacker who draws the attention of S.H.I.E.L.D. and is tracked down by Agent Coulson's team. Despite the objections of both his subordinates and superiors, Coulson makes her part of The Team. Went by the name Skye before discovering her birth name of Daisy Johnson.

"It's funny what can happen when someone believes in you."