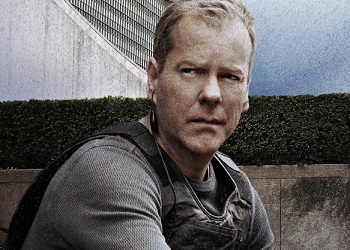 "I'm federal agent Jack Bauer. This is the longest day of my life."
Played By: Kiefer Sutherland
"I see fifteen people held hostage on a bus, and everything else goes out the window. I will do whatever it takes to save them, and I mean whatever it takes. ... Laws were written by much smarter men than me. And in the end, these laws have to be more important than the 15 people on the bus. I know that's right. In my mind, I know that's right. I just don't think my heart could ever have lived with it."

A retired American serviceman and a federal agent, who was responsible for saving multiple American citizens from potentially devastating terrorist attacks on more than one occasion.

He took a leadership role in various covert and undercover missions, and served as both Special Agent in Charge and Director of Field Operations of CTU Los Angeles. His dedication to keeping U.S. citizens safe led him to make some deep personal sacrifices. Jack lost his job, his family, his friends, and, for a period of nearly two years after Day 5, his freedom. He showed his willingness to sacrifice his life on multiple occasions, but each time his sacrifice ultimately proved to be unnecessary.