Characters and related tropes from the visual novel Dream Daddy.

The Player Character and father to Amanda. He has recently moved across town with his daughter, conveniently moving into a neighborhood of attractive dads. 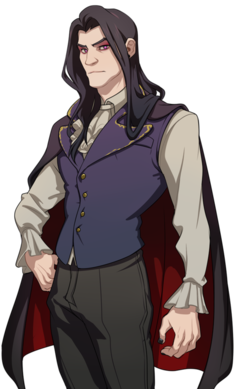 Damien is a Goth with a deep love for the Victorian times. He's also an avid gardener, and knows a lot about flowers. Is the father to Lucien, and has quite the loving relationship with him. 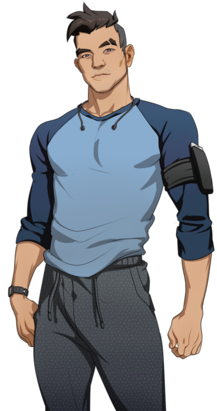 Craig is a fitness fanatic who just so happens to be the old college room-mate of the player character. He's recently divorced, and has shared custody of his three daughters, twins Briar and Hazel, and a baby called River. 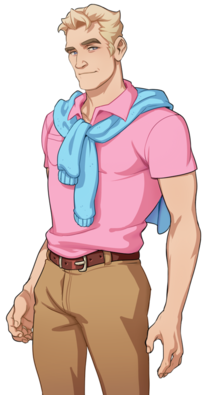 Joseph is the player's next door neighbor and the youth minister for the local church. He's married to Mary and has four kids. 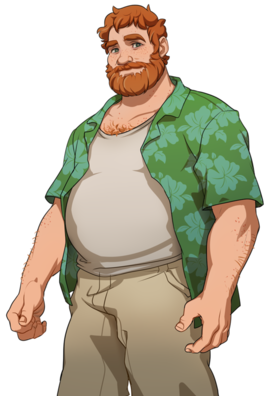 Brian is a very outgoing and competitive man who enjoys fishing and grilling. He adores his daughter, Daisy, and will brag about her accomplishments to anyone who is willing to listen. While he competes with the player character, he's very friendly about it. 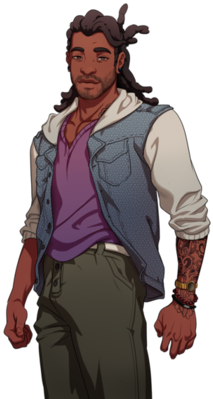 The owner of a local coffee shop called the "Coffee Spoon", and apparently the player's other next-door neighbor. Mat is the single father of Carmensita, and is a generally calm guy who likes alternative music and coffee. 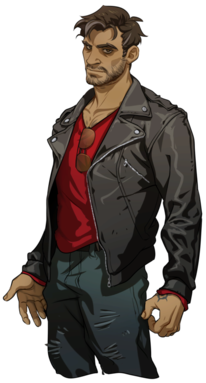 Robert is a somewhat mysterious and rugged man who keeps to himself. He is often found at the bar in the early hours of the morning. He's estranged from his daughter, who at twenty-five, is the oldest out of all the children. 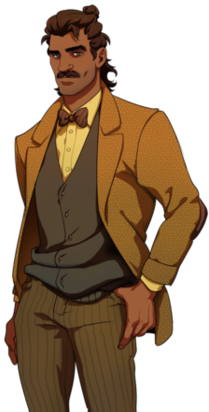 Hugo is the English teacher at Amanda's school. He's an avid history lover and bookworm. Has a son called Ernest Hemingway.

Your Daughter
Voiced by: Erika Ishii

The player character's teenage daughter. She is smart and quick thinking, has had a knack for photography ever since she was small, and intends to go to art school. 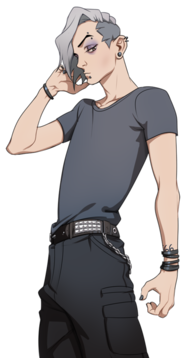 Damien's son, a Goth like his father, albeit without the interest in Victorian culture. 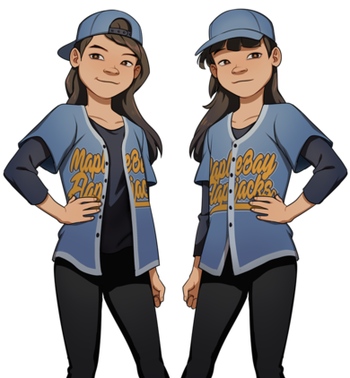 Craig's three children, born from his previous marriage to Ashley (nicknamed "Smashley"). Briar and Hazel are Craig's twin daughters, and River is his baby daughter that he periodically carries strapped to his chest.

Mat's daughter, whom he raises by himself. She's in middle school. 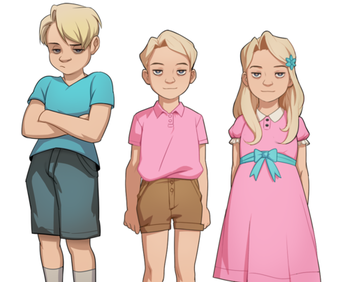 From left to right; Chris, Christian, and Christie

Joseph's four children, whom he raises together with his wife Mary. Chris is their eldest son, Christian and Christie are their male and female twins respectively, and Crish is their toddler. 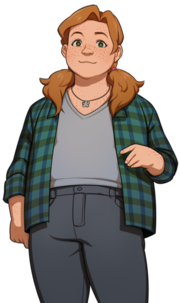 Brian's daughter, whom he is very proud of and frequently brags about.

Hugo's son, who resents his father for being simultaneously a teacher and a father, and thus the ultimate authority figure. 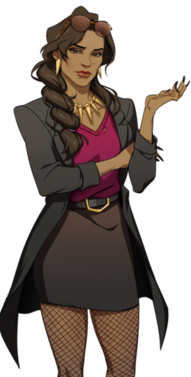 Robert's daughter. She became estranged from her father, although she wants to try reconnecting with him. 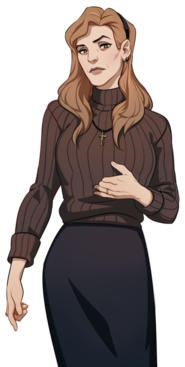 Joseph's wife. A seemingly bitter woman who dislikes her husband and suburban life.

Alex
The player character's deceased wife or husband depending on the player's choice.
Quinn 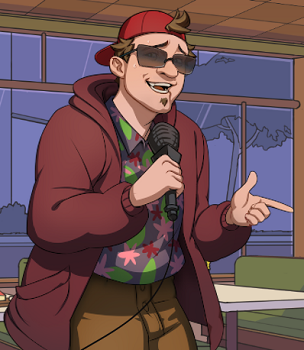 A DJ, Quizmaster, Haunted Tour Guide, and an Aspiring Actor, who acts as an NPC in several routes. He is mentioned to have several more jobs, has a business card and, as we learn in some routes, a rocky relationship with his wife.

A teen Mat is friends with; he is being raised by a single mother. Since Mat personally understands how difficult single parenthood can be, he tries to help Pablo whenever he can. The player character first meets him as he's selling T-shirts and records.

Ashley
Craig's ex-wife, and the mother of Briar, Hazel, and River.
The Duchess Cordelia
A very smart and mischievous mastiff dog.