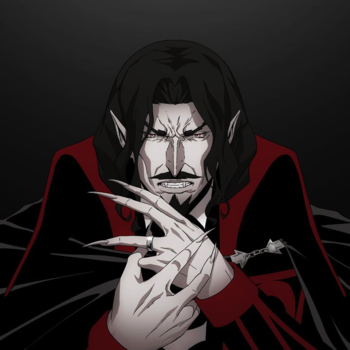 "I do this last kindness in her name, she who loved you humans and cared for your ills. Take your family and leave Wallachia tonight. Pack and go, and do not look back. For no more do I travel as a man."
Voiced by: Graham McTavish (English), Naoya Uchida (Japanese), Carlos Segundo (Latin American Spanish), Klaus Dieter Klebsch (German)

The Big Bad, Vlad Dracula Ţepeş seeks vengeance on all of humanity for his wife's burning at the stake. 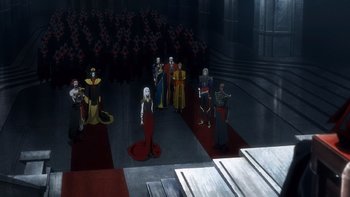 Dracula's direct subordinates, consisting of two human sorcerers (Devil Forgemasters) responsible for creating the demonic monsters (Night Creatures) that make up the bulk of his forces; along with several vampire warlords who are allied with him, who are in charge of their own respective vampire troops. 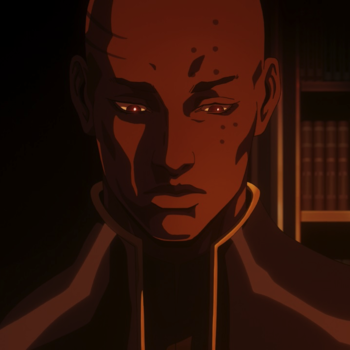 "You know... one day, the last one of you will ask me, 'Why did you work with Dracula to murder all of the people?'. And you know what I'll say? It's because you're all so fucking rude."
Voiced by: Adetokumboh M'Cormack (English), Mitsuaki Madono (Japanese), Carlo Vásquez (Latin American Spanish)

One of Dracula's two human generals and a Devil Forgemaster. 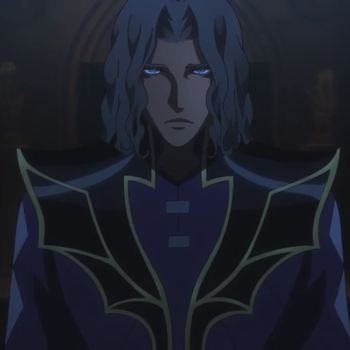 One of Dracula's two human generals and a Devil Forgemaster who performs necromancy. 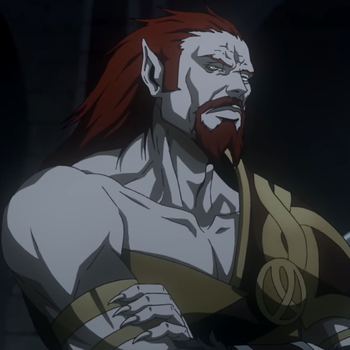 One of Dracula's vampire generals and a Viking. 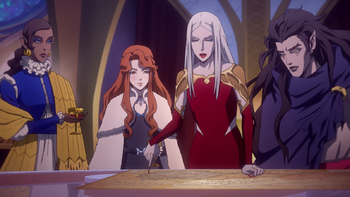 Carmilla and her three closest allies Lenore, Striga, and Morana, who conspired with her behind the scenes to launch a coup against Dracula. Although Carmilla is the official ruler of Styria, the actual power is shared amongst the four. 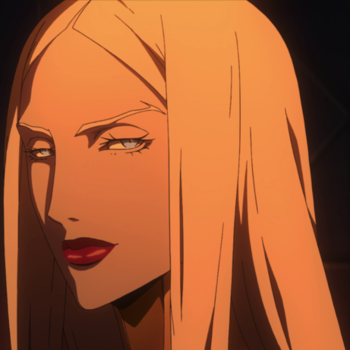 One of Dracula's vampire generals. She hails from Austria and is the last arriving member of his War Council. 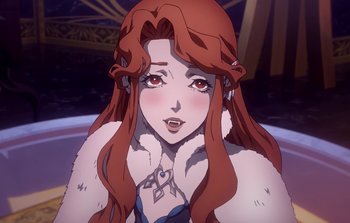 One of Carmilla's Sisters who acts as the diplomat of the group.

One of Carmilla's Sisters who acts as the general of the group.

One of Carmilla's Sisters who acts as the planner and torturer.

A rogue priest in charge of the local monastery in Lindenfeld. He and his fellow monks were once visited by one of Dracula's night creatures, falling under its spell and being driven to madness. Now they have converted to a new religion — rejecting God and Jesus in favor of revering Satan and Dracula instead.

The Visitor
A gigantic Night Creature that attacked the village of Lindenfeld following Dracula's defeat. It apparently disappeared after breaking into the local monastery and doing something strange to the monks inside.
Creatures of the Corridor
Monsters that emerge from the Infinite Corridor (an interdimensional portal accessed from the basement of the Lindenfeld priory). They may be demons from Hell, or simply a grab-bag of extradimensional monsters that fell through as the Corridor paged between destinations.

Blue Fangs: There's an army of us! An army! From Hell!

The henchmen and monsters comprising most of Dracula's forces. They include various vampire soldiers who directly serve either Dracula or one of his fellow vampire generals; along with the Night Creatures, which are a horde of hideous demons created and controlled by the Devil Forgemasters, using modified human bodies that are possessed by damned souls from Hell. 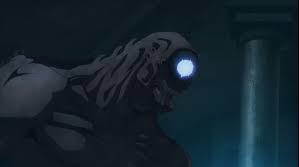 A monster stalking the catacombs beneath Gresit that preys on those who search for the Sleeping Soldier. 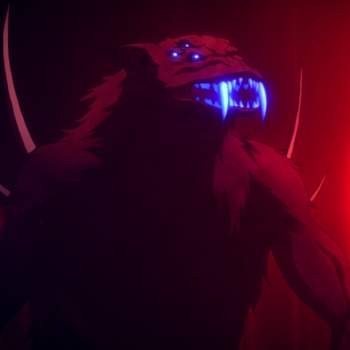 "Lies? In your house of God? No wonder He has abandoned you."
Voiced by: Fred Tatasciore (English), Dennis Mohme (German), Salvador Reyes (Latin American Spanish)

The demon at the head of the assault on Gresit. 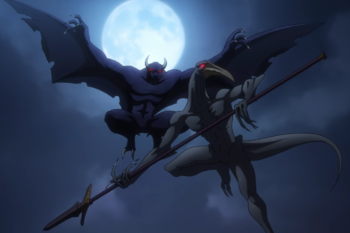 The winged demon is Gaibon. The spear-carrying demon is Slogra.

Two notable monsters from the game series encountered by our heroes after they left the town of Gresit.

A Night Creature in Isaac’s army with the ability to speak, much like Blue Fangs.

In General
The (Roman Catholic) Christian Church. Their local branches in Wallachia catalyzed the series' overall conflict by ordering the execution of Lisa Tepes on bogus charges of witchcraft, thus motivating Dracula to declare his bloody vengeance against all of humanity.
The Bishop 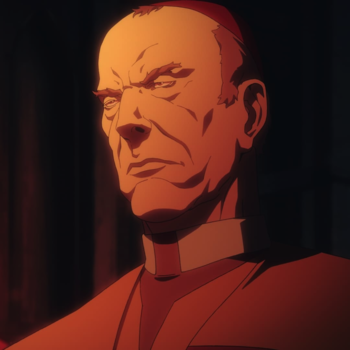 The nameless bishop of the Catholic Church who ordered Lisa Ţepeş burnt at the stake, setting the entire plot into motion.

One of the Bishop's goons, who gives Trevor trouble when he arrives in Gresit. Later, he comes back as one of Dracula's monsters.

A nameless sorcerer whom Isaac encounters during his journey to find Carmilla's castle.