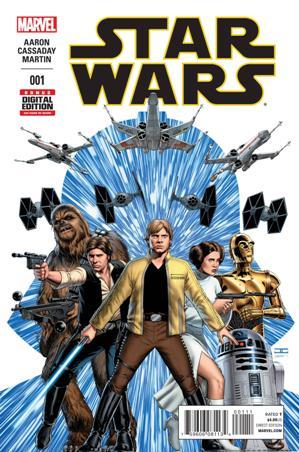 Star Wars is a 2015 Marvel Comics series set in the eponymous fictional universe, and the first series to be officially written by Marvel Comics since the series written in the seventies and eighties. Due to the Continuity Reboot, it is also the first canonical comic book released since Darth Maul: Son of Dathomir (Dark Horse's only canon contribution to the franchise before Disney bought the rights to publish comics from them).

The story of the first 75 issues is set between A New Hope and The Empire Strikes Back and revolves around the continuing adventures of Luke Skywalker, Leia Organa, Han Solo, Chewbacca, R2-D2, and C-3PO as the Rebellion gains traction following the destruction of the first Death Star. In 2020, the storyline is changed to take place between The Empire Strikes Back and Return of the Jedi, focusing on how Luke and the rebel army grew and evolved in the interim. To signify this change, the numbering is reset to #1.

Not to be confused with the 2013 Dark Horse comic of the same name written by Brian Wood, which is set in the exact same period but within the Legends continuity.