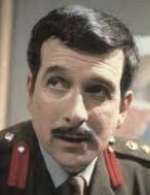 A soldier, and a gentleman.

One of the most significant and recognisable companions, although he rarely travelled away from Earth. The head of UNIT in the 70s (or in the 80s, "depending on dating protocol"), the Brig worked alongside the Doctor and many of his companions in that era and beyond — often defending the Earth from various threats. He retired from UNIT in 1976, though still met up with the Doctor on occasion, as well as with Sarah Jane (in The Sarah Jane Adventures, 2008). Trope Namer for The Brigadier, Five Rounds Rapid (from "The Dæmons") and Immune to Bullets (from "Robot").

Now retired and Happily Married to Doris, the Brigadier (or the General, although he prefers being called the former) still works with UNIT at times.