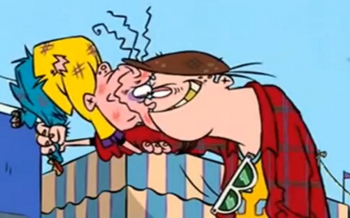 "Just for old times' sake, let's play... uncle".
"No one in their right minds would ever confuse Peter and Lois Griffin for Good Parents. But in [Go, Stewie, Go!], they are borderline criminal.
—The Parents Television Council

You think Cartoonish Supervillainy is nothing to worry about? Think again.