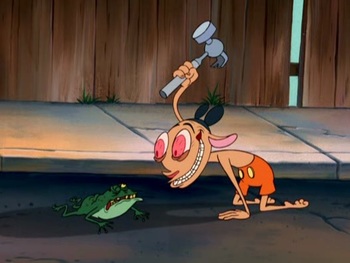 The real Mickey Mouse wouldn't hurt a fly... or rather, perhaps, a frog.
Advertisement:

Ren did something so horrible to Stimpy, it left Stimpy in hysterical grief and Ren in guilt. To atone for this, Ren seeks out a therapist to control his violent urges once and for all.

After wandering past a dreary cityscape, Ren eventually comes across the office of Dr. Mr. Horse, who agrees to listen to his problems. And that's when Ren goes into detail about his disturbing childhood, where he describes the unspeakable pain he experienced being spanked at birth, which he took out on innocent animals. His most notable victim was a frog, who was violated, blown up, ground up by a tricycle wheel, and electrocuted. By a car battery. Upon learning that the frog wanted to be put out of his misery, Ren decided to force him to continue living instead.

Ren then shares with Mr. Horse his relationship with Stimpy, talking about how they first met. He then goes on to reveal what exactly he did to Stimpy, which is never revealed to the audience. This horrifies Mr. Horse so much that he proceeds to assault Ren, causing Ren to go berserk. He beats Mr. Horse, and bites off the hand of one of the asylum workers trying to capture him. After Ren is hauled away, the frog from Ren's childhood visits the bloody scene, and shoots himself with Mr. Horse's gun which turns out to be a 'BANG' gun that impales him, leaving him in even more agony.