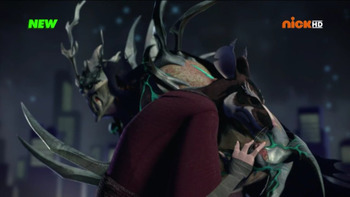 The Shredder kills Master Splinter.
Leonardo: You killed him! He was your brother, and you killed him! (Between exchanged blows) He was your brother, Saki! Your best friend! How could you do that?!
Shredder: Splinter was cursed to become a loathsome rat! It was his fate... HIS DESTINY!
Leonardo: You're a monster! A demon! Is that YOUR destiny?
—Owari, Teenage Mutant Ninja Turtles (2012)