Self-Made Man
aka: Self Made Woman 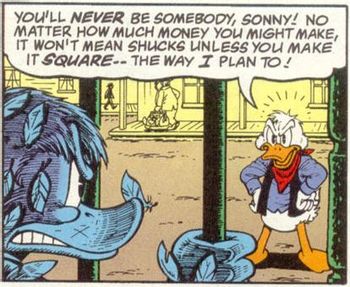 Young Scrooge McDuck sets the record straight with Flintheart Glomgold.
"A self-made man, who worships his creator."
— John Bright on Benjamin Disraeli (and many other people on many other people)
Advertisement:

This person owes very little to anyone for their success. The few advantages that they possessed are disproportionate to the scale of their achievements; the principal cause of the latter being their own skills, talent, and merit. Be it through hard work, dedication, commitment to their work, a little cunning, some business acumen, and a dollop of serendipity, they have gone from unimportant to important. This is usually who you get at the end of Rags to Riches, but this is not that trope because the Self-Made Man is often there right at the start of the story, whereas Rags to Riches follows the course that leads a character here.

Often the conflict of this kind of story revolves on societal acceptance and reputation. Typically, in works set further back in history, they are looked down on as upstarts, a reflection of the dislike a lot of the nobility had for the power shift following the Industrial Revolution. In more modern settings they might be respected to the point of Cult of Personality, basing their ascent on how they had to climb the ladder from the bottom. In other kinds of stories, the story have characters looking back on the process by which they made themselves, wondering if the rest of their lives are going to be as exciting and adventurous, or if what they built and sustained can last, or if it has any meaning in wider society and history beyond their own personal success. Expect them to show fewer social graces but often more political savvy than the more traditionally wealthy, except when he is feverishly trying to imitate and become socially accepted by the Blue Bloods, when he generally comes off the worse. The Arranged Marriage for the Impoverished Patrician is often to a Self-Made Man, or his daughter (or any situation where Nobility Marries Money), though it also is possible that his rise was because he was Unable to Support a Wife, and she did indeed Wait For Him. In Passed-Over Inheritance, the will-making character is often this trope, because refusing your children the inheritance you got comes across as petty.

The archetype of self-made men can involve politicians, clergy, soldiers, scientists, artists and of course, businessmen. In the case of artists, novels like Bildungsroman and Kunstlerroman often serve as a coming-of-age story for how people make themselves into these kinds of individuals. In the case of scientists, it deals with the times they spent until they found the "Eureka!" Moment. A Self-Made Man can appear as a protagonist, a Tragic Hero, a Tragic Villain, a hero or anti-hero. They can also be supporting-characters, where their interesting plot is mostly over and at times serves as backstory or foundation in which one can mine for dramatic gold, guilt, baggage, Dark and Troubled Past or Glory Days. A less positive spin on this trope is the stereotypically boorish Nouveau Riche. As this character tends to Default to Good, it can be seen as an inversion of Ambition Is Evil. A second variant of this trope is that of a character who, for whatever reason, chooses to change their basic nature in defiance of normal expectations of what they are "meant" to be or are likely to become — a naturally selfish or evil-inclined character, for example, forcing himself moment-to-moment to act generous or good because he has decided to make himself that way. This archetype is similar to Übermensch. They might be the middle generation of the Three Successful Generations. What is necessary for self-made also differs. Doing well after graduating at the top of your cause and maintaining high academic standing (all of them being markers of merit) is somehow not as remarkable as achieving something without going to university, either by being self-taught or being a "savant".

As the gendered trope name suggests, this trope has generally been Always Male. Indeed the trope Never a Self-Made Woman, explains how successful women have historically had their achievements tied to connections with men, who had to make it possible for them. This is more how the trope is portrayed than it is in reality since there are indeed quite a number of women whose achievements are no more over-advantaged than that of men. And of course what seems self-made in one era and context changes from another.

If he forgets that it's not always just a simple matter of effort and determination, that's the Hard Work Fallacy. Not to be confused for the book by Norah Vincent, a chronicle of immersive journalism in which she passes for a man for more than a year.

Alternative Title(s): Self Made Woman