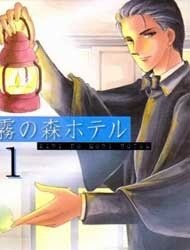 Kiri no Mori Hotel (The Hotel in the Forest of Mist) is a horror/mystery Josei manga created in 2007 by Chie Shinohara.

Nobody knows exactly where it is located, but there is a place that offers shelter to those who hate their lives or are trapped in a labyrinth of their own heart... A mysterious hotel. Even now, those who are tired of their lives come to stay in the Kiri no Mori hotel...

The guests of the hotel are often brought along in a state of confusion, trying to figure things out about their lives or working out things they still regret from their past. The hotel helps them deal with their problems and to see things more clearly with varying degrees of success.

Each story follows a different protagonist, or multiple protagonists, and focus on their relationships with their family and friends. Other times, the hotel itself is more in focus and it is explained more to the reader.

Yet, it still remains mysterious.