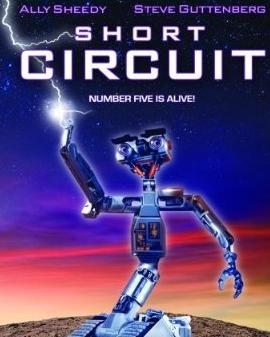 "Number Five... is Alive!"
"Life is not a malfunction."
— Stephanie Speck
Advertisement:

Short Circuit is a pair of films about a bleeding edge military robot who becomes self-aware. Dubbed "Number Five", his first instinct as a sentient being is to invert the Killer Robot genre: he doesn't want to kill, and is hunted by the weapons manufacturer that made him. It doesn't slot easily into any one genre, instead toying with hard sci-fi, romantic comedy, tragedy, revenge drama, and slapstick (Number Five ignoring his laser cannon to sling mud at people).

In the first film (1986), Number Five short-circuits during a routine maintenance check and flees his birthplace of NOVA Robotics. With mobile tank treads, hair-trigger tactile response, dodgy AI and packing serious heat, Five is the grandaddy of corporate liability. In a panic, NOVA deploys its private security force to recapture and/or destroy the robot while his original programmers (Steve Guttenberg and Fisher Stevens) try to stall them. Sure enough, Number Five pulls into a nearby town and befriends a Granola Girl named Stephanie Speck (Ally Sheedy), who mistakes him for an extra-terrestrial and NOVA for an evil government agency. Meanwhile, Number Five is adapting... learning... and willfully ignoring commands.

The second film (Short Circuit 2, 1988) centers on Benjamin Jabituya (now inexplicably called Benjamin "Jahrvi"), who helped program Number Five and was blackballed as a result. Living out of a truck, Ben now hustles little NOVA-inspired toys in Manhattan, but he's having problems getting production up to speed. So, Stephanie sends Number Five, now calling himself Johnny Five, who is a one robot production line. Unfortunately, Ben's business partner Fred Ritter (Michael McKean) sees bigger opportunities. But all this takes a back seat to Johnny being manipulated by thieves to help in a bank heist, which shatters Johnny's naiveté and leaves him wanting revenge.

A third film was in talks afterwards, but was eventually canned due to scripts not meeting expectations. Johnny 5 would eventually return in a TV short named Hot Cars, Cold Facts with his having his own home and a car. Even though it was primarily an educational film regarding vehicle ownership and insuring, the comedy of the two movies remains.

Pixar stated that Johnny Five provided some (unintended) inspiration for WALL•E, both in appearance and personality. A remake is being planned, but it is in the very early stages.

The opening sequence of Short Circuit shows the construction process of the S.A.I.N.T. robot line.

The opening sequence of Short Circuit shows the construction process of the S.A.I.N.T. robot line.