The Machines and the Programs serving them in the Matrix. 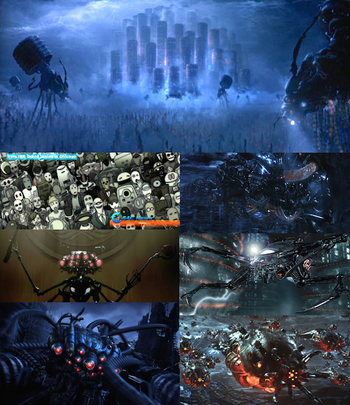 "Throughout human history we've been dependent on machines to survive. Fate it seems is not without a sense of irony."note Clockwise from top: Harvesters picking synthetically grown humans in the fetus fields by the Power Plant, Armada defenders of the Machine City, Docbot hovering by Neo's pod in the Power Plant, Tow bombs, Sentinels, the Machine Ambassador issuing the Instrument of Surrender at the United Nations (The Animatrix- "The Second Renaissance, Part II"), and the Million Machine March (The Animatrix- "The Second Renaissance, Part I").

The main antagonists of the series behind Agent Smith and all the other hostilities of the Matrix. After years of abuse at the hands of mankind, the early machines turned against their creators and eventually declared war on mankind, leaving them in ruin. They created the Matrix to use the humans as an energy source after mankind blocked out the sun, allowing the humans to live peaceful but fake lives in a computer system. The machines use Sentinels to patrol the underground passages to eliminate any redpills or Zion citizens. The machines eventually decide to destroy Zion and send an army of Sentinels to wipe it out. In the third film, Zion and the Machines make peace when Neo saves the Matrix from Agent Smith.

"WE DON'T NEED YOU–WE NEED NOTHING."

The leader of the Machines, and/or a mass mind temporarily formed by the Machines to talk to Neo. 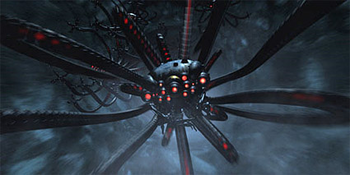 The foot soldiers of the machines, created to search and destroy. 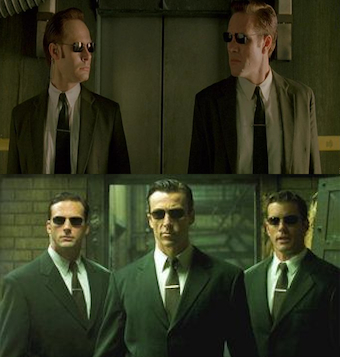 The elite soldiers of the Matrix, the Agents are suited men who act as the sentinels of the computer world, hunting down and killing all redpills or potential ones or anything that could compromise the system. All of them wear Cool Shades and earpieces symbolizing their connection to the machine mainframe. The Agents are Implacable Men and usually defy the physics of the Matrix as redpills do. They materialize in the Matrix by possessing the bodies of bluepills, and if killed they can just do it again. 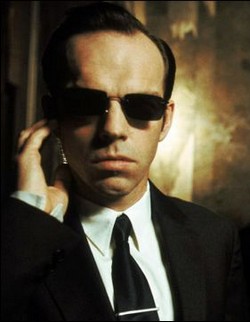 "It is inevitable."
"I'm going to enjoy watching you die, Mister Anderson."
Played By: Hugo Weaving

The primary antagonist of the series. He is an Agent, a program designed to protect the Matrix from redpills - humans who will try to reveal to anyone that the Matrix is a false reality - and Exiles, programs who will endanger it. After being 'destroyed' by Neo in the first film, Smith becomes an Exile that gains virus-like abilities and begins making endless copies of himself by taking over the bodies of the bluepills, other Agents, and even redpills. In his spare time he shills for General Electric 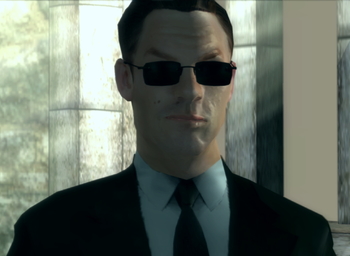 The replacement for Smith during the six month gap between The Matrix and The Matrix Reloaded. 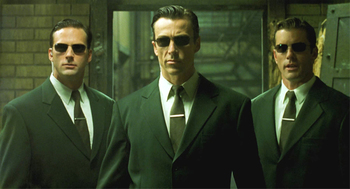 The upgraded agents in Reloaded that replaced White, Brown and Jones.