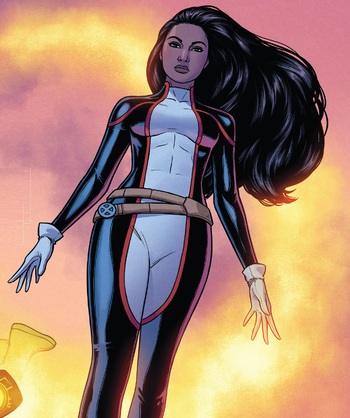 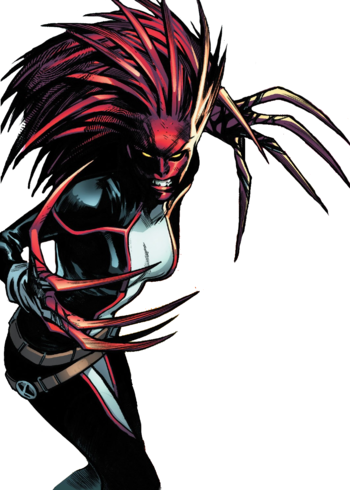 "I don't hate everybody, I think I'm better than everybody. It's completely different."
—Monet, X-Factor
Advertisement:

Monet St. Croix, sometimes known by the codenames "M" or "Penance", was created by Scott Lobdell & artist, Chris Bachalo in 1994. She first appeared in the crossover, Phalanx Covenant, before starring in Generation X with her classmates & their mentors, Banshee and Emma Frost.

Monet St. Croix possesses a wide variety of mutant powers which represent a near-perfect human being. Her powers include superhuman strength, superhuman speed, agility, endurance, reflexes, coordination, and balance; self-propelled flight; nigh-invulnerability; night vision and enhanced hearing; an enhanced healing factor and the ability to read minds and perceive mutant auras. Her superhuman physicality, multi-hyphenate abilities, and arrogance have dubbed this French Algerian mutant to be the "perfect" mutant. She is also one of Marvel's first Muslim superheroes.

With the founding of the mutant nation of Krakoa, Monet emerged as one of the co-CXO's of the reborn X-Corp, responsible for being the business face of mutantkind to the rest of the planet.