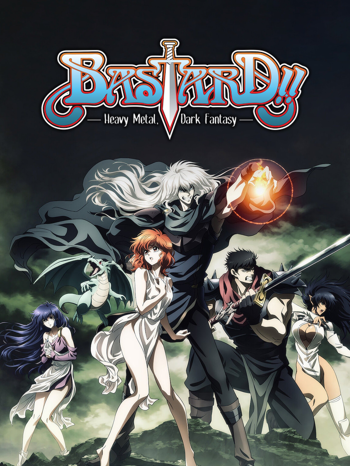 "My obvious charms and god-like powers always dazzle the simple ordinary folk."
"Give a million monkeys a million typewriters and infinite time, and you'll get the complete William Shakespeare. Serve them piña coladas, and you get Bastard!!"
— Per Arne, Encyclopedia Obscura
Advertisement:

Set in a post-apocalyptic Earth where monsters and magic are the rule of the day, the main setting is the kingdom of Meta-llicana, threatened by a vast army of mages and their pawns who are trying to wake the sleeping god of destruction, Anslasax.

This series is centered on the virginal (this is a plot point, in fact) priestess Tia Noto Yoko and her adoptive brother, Luche Renlen. What she finds out is that Luche contains within him the spirit of one of the most powerful sorcerers of all time, the infamous Exploder Wizard... Dark Schneider! Only a spell capped with a kiss from a virgin can unlock the spirit within Luche and save the kingdom!

Add in the other villains who turn into antiheroes when defeated by Dark Schneider, and the amusement value of many of the spells and locations which are named after '80s metal bands (Dark Schneider himself was named after Udo Dirkschneider from Accept, the country of Judas Priest, the samurai of the Iron Maiden who are fighting to avenge King Harris, knights named Bon Jovina and Lars Ul Meta-llicana, the extremely powerful spells Exodus and Megadeath...) and you get a romp. Because of a potential blatantly ludicrous licensing fee to use them all, these names had to be all changed in the American release. The manga has been released in the US (with quite a good translation) up to volume 19 (though at present, it seems Viz Media has abandoned the series).

The series received an OVA in 1992, produced by Shueisha themselves as well as Geneon Entertainment and animated by AIC, Geneon's American division later released and dubbed the OVA in 1998. It's six episodes long, and only goes through the first three collections of the manga (which is currently up to volume 27), so it ends with a "Hey, what now?"

that Bastard!! would be receiving a new anime adaptation consisting of 24 episodes, with animation by Liden Films and will be distributed by Netflix worldwide. The first cour (first 13 episodes, which covered the same material as the first 5 episodes of the 1998 OVA, while adding back in material that was skipped between episodes 3 and 4 of the OVA) became available for streaming on June 30th, while the second cour (episodes 14-24, covering the rest of the story up until volume 8) becoming available for streaming on September 15th.

The second season of the anime has also been announced

, set to premiere sometime in 2023. It will adapt the Hell's Requiem arc of the story.

for the first half, and the September 8th trailer for the second half

"I've heard enough from you!"

Divine King Abigail begins monologuing at his former colleague Dark Schneider about how has gained the human heart of Lucien Renlen, but Dark Schneider doesn't want to hear it.

Example of:
Shut Up, Hannibal!

"I've heard enough from you!"

Divine King Abigail begins monologuing at his former colleague Dark Schneider about how has gained the human heart of Lucien Renlen, but Dark Schneider doesn't want to hear it.