Due to the nature of this series, spoilers are off! Read at your own discretion.
open/close all folders 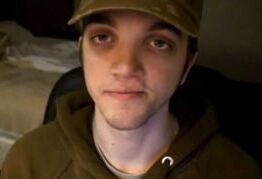 Played by: Troy Wagner
"Looking through some surveillance footage. Not sure what I'll find. I feel like I just have [to] know one more time what's been going on."

A college friend of student filmmaker Alex Kralie, and possibly the last person Alex talked to before leaving town. Jay wound up in possession of the raw tapes for Marble Hornets, the original student film, but forgot about them until he read something online that reminded him of them.

"I thought I would be safer here, by running away, but everything's just gotten worse. I'm going back to my home, and I'm burning these tapes. All of them."

A student filmmaker and friend of Jay. While making his first student film, Marble Hornets, in the summer of 2006, he rapidly grew stressed and paranoid. Eventually he outright dropped the project, due to "unworkable conditions" on the set, despite the fact that the set was largely in or around his home town. He soon after broke off contact with everyone and disappeared.

He was shown to be alive and well with his girlfriend Amy in Entry #26, and met with Jay over the seven month gap.

The Marble Hornets website provides some more information about him: "Alex Kralie, born April 4th 1986, has been into making films since his early childhood, when he would make short sketch comedy videos starring himself and his cousins with his parents camcorder. He would then show them at 'premiers' to his friends and family. That love has since remained with Alex, where he has been involved in many different capacities in various filmmaking communities. He is a double major in both filmmaking and photography, with a minor in theatre. He originally wrote Marble Hornets during high school and has continuously tweaked and polished it throughout his time at the university. He�s very excited to finally see it all happening after years of work!" 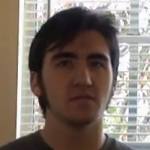 One of the actors of Marble Hornets. He met up with Jay in Entry #15 to discuss the circumstances surrounding Marble Hornets, but was under the impression that Jay would be continuing the project. According to the series website, Tim was also slated to be behind the film's score, "bringing in a unique analog style rarely heard in films these days." Started developing a sickness similar to Jay's towards the end of production. Known for his sideburns. He returns in season 3 as a prominent character whom Jay interacts with.

He was revealed to be the Masked Man in Entry #35, and then returns in Entry #53 seemingly back to his old self. Much of the third season revolves around Tim and finding out about his double-life as the Masked Man, as well as admitting that his history with the Operator most likely dates back to his childhood...

Jessica Locke
Played by: Jessica May 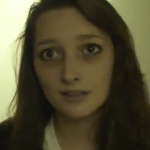 "I don't know how I got here. You're the only other person I've seen in this hotel other than the staff, and we have adjoining rooms. I don't even know you, you said it yourself, I'm a stranger!"

A girl who stayed in the hotel room next to Jay. Not much is known about her, only that she, like Jay, was a huge victim to Laser-Guided Amnesia, and disappeared after she revealed it to Jay. Has been confirmed to be taken by the Operator - possibly even dead - as of Entry #76.

As of Entry #87 we find her still alive, and apparently seeking the same treatment Tim was undergoing.

A tall, faceless, humanoid creature that has been stalking the cast of Marble Hornets. Alex gradually became aware of it during filming, and went from curiosity to paranoia as it kept appearing. It can appear and disappear seemingly at will, sometimes covering great distances in an eyeblink.

Evidence from Entry #60.5 as well as the comments of Tim and Alex in later entries seem to confirm that The Operator's earliest known activities consisted of following Tim from an early age before eventually influencing the members of the Marble Hornets student film cast. Its mysterious attachment to Alex Kralie and the resulting consequences drive many of the events in the series' chronology.

A masked person that first appeared in Entry #18, who follows, stalks, and sometimes attacks Jay. He has some connection to the Operator; it’s implied at some points that he’s also a victim of it, and maybe even trying to fight it, but their exact dynamic is never clear.It is eventually revealed that “Masky” is Tim. It was originally implied that he was the owner of ToTheArk, as well; later development indicate the Hooded Man was the main voice behind it, but Masky might have still been involved.

A second masked person first seen in Entry #41. As his name states, he wears a hoodie, and what appears to be a black ski mask or balaclava.

Entry #61 confirms that he was totheark, or - if Jay's theory of there being multiple totheark users is true - at least one of the users of the account. “Hoody” died in Entry #83, when he fell headfirst several stories onto a concrete floor. He was revealed to be Brian at the end of Entry #84.

totheark
"From the start, it's been a game for us. Not anymore."

A mysterious YouTube channel that started responding to Jay's entries with videos of its own. Its first videos were cryptic messages full of symbolism and codes, but as they progressed, the owner (or owners) of totheark showed that they werea lot closer to Jay than was originally let on, and know a lot more about what is happening.

During Season 1, totheark provided a lot of footage that was missing from the original entries, as well as footage observing Jay on numerous occasions. Because of numerous hints and the way Masky was in many of these videos, many people (including Jay) believed totheark and Masky to be the same individual. However, given the growing inconsistency in tone of the channel's videos between Seasons 1 and 2, Jay started theorizing that the channel could be run by multiple people. It's since then been revealed that the Hooded Masked Person either runs the channel or (more likely) runs it along with Masky.

//Totheark died in Entry #83, when he fell headfirst several stories onto a concrete floor. He was revealed to be Brian at the end of Entry #84.

"What is this part supposed to mean?"

One of the actors in Marble Hornets. He was close friends with Alex and Tim and played the film's main character as well as helping him with production. He was the one who originally got Tim involved with the production in the first place. His current whereabouts are unknown. May have disappeared even before Alex dropped the project, going by an offhand comment in Entry #20 that he is "somewhere".

The Marble Hornets website provides more information about Brian: "Brian has been attending the university for three years, and is hoping to graduate after his next couple of semesters with a Bachelor's degree in psychology and a minor in video production. He originally met Alex in Dr. Warren's cinematography class where they collaborated on quite a few projects together."

Season two reveals that he was lured to an abandoned hospital by Alex, who left him to be "taken" by the Operator. He apparently survived the episode, but was permanently locked into the “Hoody” persona, eventually leading to his death in Entry #83.

"When did we get a camera?"

Alex's girlfriend, introduced in Entry #26. She was the one who found the camera Alex used during filming, inadvertently summoning the Operator. She has not been seen since.

In season 2, we find out Alex and Amy escaped the Operator's initial appearance, but soon afterwards Alex blacked out and Amy vanished. Since then, Alex has claims to have been looking for her...supposedly. Amy's ''true'' status is currently unknown to both Jay and the audience.

Seth Wilson
Played by: Seth McCay
"Have any of you seen Alex?"

The cameraman for Marble Hornets. He got into trouble with Alex in Entry #9 for not leaving the camera rolling, and later accompanied him to an abandoned house in the tape shown in Entry #22, where he is implied to have met an unpleasant fate.

"Who else is going to work with you, with this attitude?"

The only known female participant in the original film project. As well as being an actress in the film, she apparently did some camera work when Seth wasn't available. Her current whereabouts are unknown.

The Marble Hornets website has more info on her: "Sarah is an actor based in and around the university area. She has been involved in many productions both onstage and in front of the camera. She was most recently seen as Celia in the university�s production of As You Like It."

A seemingly innocent bystander who appears in Entry #49. He gets murdered by Alex and his body is taken by the Operator.