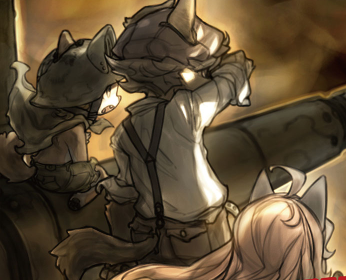 Fuga: Melodies of Steel note Also known in Japan as Fugue on the Battlefield is an upcoming Strategy RPG with Roguelike elements by Cyberconnect 2. It is the third game in the Little Tail Bronx series, following Tail Concerto and Solatorobo, as well as the first part of the company's Trilogy of Vengeance, consisting of three self-published games.

Chronologically, the game is a prequel to Tail Concerto and Solatorobo set 1000 years prior. From what we know yet, the story will follow 11 orphans on a giant tank called Taranis, vestige of a past civilization, against a military army known as the Berman Empire. Gameplay-wise, the game will have the player manage each character's position on the Taranis, which will change their possible actions in battle. One of the most powerful weapons on board is the Soul Cannon, a devastating cannon with a rather steep cost: One of your crewmember's lives...

The game was annonced in February 6th, 2018 for a Summer 2019 release, but was delayed and is now stated to release in Early 2020 for PC, PlayStation 4, Xbox One and Nintendo Switch.

Not to be confused with Studio Fuga.