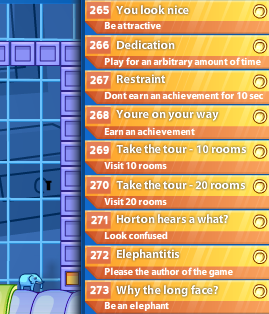 999: Caption Captain — Read the caption on Achievement System.
Any centralized in-game listing of optional objectives that records various milestones and feats the player may have accomplished while playing a Video Game; this is not so much about the individual achievements by themselves, but the game's means for tracking and recording (and, sometimes, rewarding) them.
Advertisement:

Many achievements are things that the player will inevitably accomplish during a typical playthrough (e.g. complete the story mode, defeat Y number of enemies, etc.), but the achievements themselves do not need to be relevant to game or story progression; some may involve Side Quests (e.g. trade in those 20 Bear Asses for that Infinity +1 Sword), or obscure things that the player might not even think about (e.g. fall for that Shmuck Bait) or realize were even possible (or sane) to attempt in the first place (e.g. defeat the Bonus Boss with only the Joke Weapon).

Note that not all achievements are fully revealed to the player ahead of time, as some of them may invariably spoil certain Plot Twists or surprises if the player knows them going in; e.g. an objective like "defeat The Lancer after his Face–Heel Turn in chapter 16" is decidedly spoiler material; a censored hint like "defeat ??? during chapter ???", much less so. Some achievements may even be kept secret entirely (hopefully only until the player has reached the relevant section of the game, so they can come back for it later).

A Sub-Trope of Cosmetic Award (in the same way that a forest is related to an individual tree).

On PC, it's not an official requirement, many PC games distributed via Valve's Steam, CD Projekt Red's GOG, or the Epic Games Store often include achievement systems anyway, as the same games may also be (or have been) ported to the Xbox or PlayStation consoles. Nintendo does not have a system-wide achievement system, but games on the Nintendo Wii, Nintendo Switch, and Nintendo 3DS do have achievements per-game made by respective developers.

Note that for the sake of brevity, we'll limit this list to only games whose achievement system is voluntarily implemented, i.e. exceeds requirements imposed by the game platform.