Characters / Pirates of the Caribbean: Navy

George II, King of Great Britain and Ireland, Duke of Brunswick-Lüneburg (Hanover) and Prince-elector of the Holy Roman Empire 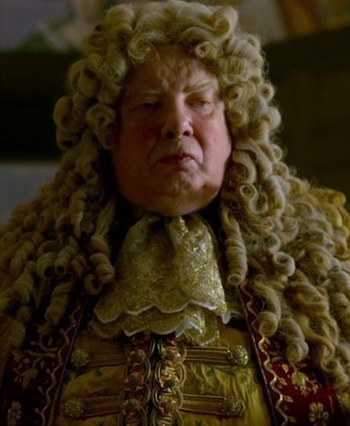 "I will not have some melancholy Spanish Monarch—a Catholic—gain eternal life!"
Played by: Richard Griffiths
Appears in: On Stranger Tides
Prime Minister Pelham: "You are in the presence of George Augustus, Duke of Brunswick-Luneburg, Archtreasurer and Prince-elector of the Holy Roman Empire, King of Great Britain and Ireland... and of you."

The King of Great Britain during the time of the movies. He only appears in the fourth movie, in which he's looking for the Fountain of Youth. He's shown to be not very competent at his job.

Played by: Jonathan Pryce
Appears in: The Curse Of The Black Pearl | Dead Man's Chest | At World's End
Governor Swann: Lieutenant Norrington, I appreciate your fervor, but I'm... I'm concerned about the effect this subject will have upon my daughter.
Young Elizabeth: Actually I find it all fascinating.
Governor Swann: Yes. That's what concerns me.

"It's just good business."
Played by: Tom Hollander
Appears in: Dead Man's Chest | At World's End
"Advise your brethren. You can fight, and all of you will die... or you can not fight, in which case only most of you will die."

The Big Bad of the second and third movies and a professional dog kicker. Also obsessed with catching Sparrow because of their old grudges. Dangerously intelligent and determined, he wants to purge the seas of pirates. His primary plan to achieve this is to find the heart of Davy Jones, and scarily, he succeeds in it, thanks to the help of James Norrington. He does some pretty horrible things, like order the hanging of a child. 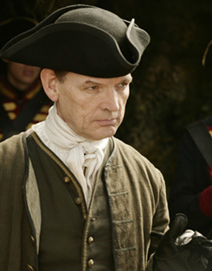 One of Beckett's most loyal henchmen with a definite violent and psychotic streak (Psycho for Hire?) who fills the absence of Norrington when he tags along with the pirates.

Played by: Greg Ellis
Appears in: The Curse Of The Black Pearl | At World's End | On Stranger Tides

One of Norrington's officers in Curse of the Black Pearl, he reappears in At World's End (as an officer on Beckett's ship, the Endeavour) and On Stranger Tides (as Barbossa's first mate). Always cheerful and enthusiastic, in contrast to Norrington's straight-laced personality.

Lieutenant Gillette
Played by: Damian O'Hare
Appear in: The Curse of the Black Pearl | On Stranger Tides

An officer in the British Royal Navy who's initially the right-hand man of Commodore Norrington. He later reappears in On Stranger Tides working under Barbossa with Groves.

An inseparable pair of Royal Marines who crew under Norrington. Their personal incompetence and bizarre personal quirks result in their mostly providing comic relief. 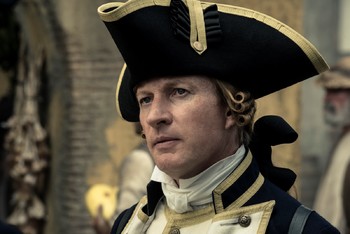 "Only the British Empire will hold the power of the sea."
Played by: David Wenham
Appears in: Dead Men Tell No Tales

A Royal Navy officer who wants to see Carina and Henry executed for their alleged crimes, and later tries to claim Poseidon's Trident for the British Empire.