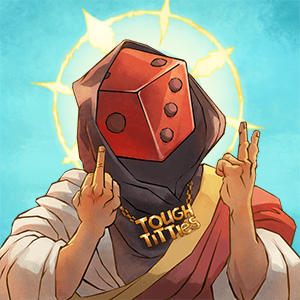 "I am the way, the truth and the dice. Embrace the unforeseen and let God's everchanging light gently fuck you over or roflstomp you to victory."
"If a statistician hands you a die insisting that 'any given roll has the same odds of rolling a one or a twenty', it means he's handing you a depleted die in the hopes of taking advantage of you. Don't fall for it!"
— Shamus Young, DM of the Rings

Also known as RNGesus, if you're feeling punny.

A statistician can tell you that properly generated random numbers will follow a discrete uniform distribution, giving you a roughly equal chance of rolling very good or very bad numbers. They may wax eloquent about how pseudo-random numbers are generated in computers, and how dice are wonderful randomizers. A good statistician will even disabuse you of the notion that a six sided die has an exactly 1/6 chance to land on any one side; most dice are not built to that kind of precision. (Casino craps table dice are. They're also more expensive.) But it's going to be close to even distribution, even with a cheap die.

A gamer, either of the tabletop or video variety, will tell you that this is all a load of dingoes' kidneys. The characters that gamers play live and die on good or bad rolls, and even if your dice are perfectly square and uniform, even if your game uses cryptographically strong random numbers, these numbers do not follow "distributions" or "probabilities." Instead, they usually produce whatever number you really didn't want. A tabletop gamer may say that the dice are "trying to kill" them if they encounter a long series of bad rolls (e.g. broke every weapon he was carrying). Unless, of course, you know the proper way to placate the Random Number God: then the dice will smile upon you. Usually.

The name of this trope comes from Angband's and NetHack's fanbases (coined in the Angband fanbase, spread by Nethack's), as a fanciful expansion of "RNG", for "Random Number Generator"; both games use Gameplay Randomization and are partially Luck-Based Missions, considering how many Instant Deaths there are, and the players of both games have been known to build altars to the "Random Number God" or curse his/her/its name. Or both.

For literal deities of luck and fortune, see Lady Luck.