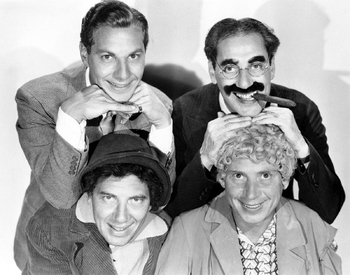 The Marx Brothers were vaudeville comedians from the early 20th century. They later starred in their own Broadway shows, and subsequently in movies. They were wild, outrageous, and gut-bustingly hilarious, with the act's three central figures each being a master of a different brand of humor: verbal (Groucho), ethnic and musical (Chico), and surrealistic, slapstick pantomime (Harpo).

A family act, the Marx Brothers went through several incarnations under various names—including "The Four Nightingales", "The Six Mascots", and others—until an appearance in Nacogdoches, Texas, where the audience left the theatre in the middle of a performance to go watch a mule. This outraged the team, who promptly started breaking from their script to abuse the audience, which went over far better than they intended as the audience found it hilarious. Recognizing a great gimmick when they saw one, the Marxes soon incorporated into the act a significant element of what would be referred to today as improv comedy, frequently mocking theatrical clichés and tropes, and quickly began to move up through the ranks of vaudeville performers, eventually reaching the very pinnacle of vaudeville fame: performing at New York's Palace theatre. A disagreement with the executive running the biggest vaudeville circuit at the time exiled them from big-time vaudeville, and sent them into regional touring, which was difficult and draining. The troupe was on the verge of disbanding when a backer willing to fund a legitimate theatre production was found. Success on the road with I'll Say She Is, a stage revue based in part on their vaudeville routines, continued when the show was brought to Broadway. Their performance caught the positive attention of the theatrical critics as well as the audience, and their relatively haphazard, underfunded show ran for months. Their subsequent show, The Cocoanuts, was also a success, and was adapted to film, launching one of the greatest series of screen comedies ever made.

The family had five brothers, although only four (and later three) performed together at a given time. According to interviews Groucho gave late in his life, their stage names reflected personal traits or important events in their lives, and were inspired by a comic strip called Sherlocko the Monk, which triggered a brief rash of nicknames ending in "-o".

Also frequently joining them was the matronly figure of Margaret Dumont, typically cast as a wealthy widow who was a perfect foil for Groucho; he would alternate between shamelessly flirting with her ("Ah, married. I can see you right now in the kitchen, bending over a hot stove...") and viciously insulting her ("But I can't see the stove."). A common misconception is that Dumont was not a comedy actress, didn't understand the Marxes jokes, or was exasperated by their antics on set (not helping this was a one man show Groucho did at Carnegie Hall where he falsely spread, if not directly originated, said misconception), but the truth is that Dumont was extremely canny as an actress, and not only understood everything around her, but was consummately committed to her role as the Straight Woman to the brothers, knowing how important her role was to their humor.

Their comedic style was chaotic and absurd, with lots of word play, pantomime and satire. In general, they would appear in stock stories, tired even by the standards of the day, and demolish them. The surrounding characters, trapped by their roles, would attempt to continue on through the story, mostly ignoring the literary deconstruction going on.

In particular, Chico, Harpo and Groucho had their own identifiers:

Groucho and Harpo went on to inspire the characters of Yakko and Wakko respectively in the hit 1990s Warner Bros. cartoon Animaniacs. In fact, an episode of Animaniacs entitled "King Yakko" is very similar to Duck Soup, following a similar plot and with Yakko and Wakko falling into roles similar to those of Groucho and Harpo. The episode even ends with Wakko having a beautiful woman hold his leg, one of Harpo's Running Gags.

Also, Bugs Bunny: Bugs actually stole some of his mannerisms and lines from Groucho, including the famous line "Of course you know, This Means War!" It is also argued that the way Bugs holds his carrot is meant to be reminiscent of Groucho and his cigar. There was even a Looney Tunes short in which Bugs disguised himself as Groucho to evade the attentions of restaurant chef Elmer Fudd. It didn't work, because Fudd was already disguised as Harpo.

Groucho also has the distinctive pleasure of starring in a series of successful mystery novels by author Ron Goulart in which he and his writer Frank Denby investigate various murders and crimes that popped up in Hollywood during the 1930s (in the novels, Groucho did the investigations in between his working in movies and his hosting a weekly radio program).

For another comic trio that was famous around the same time, see The Three Stooges

They often employed such tropes as: