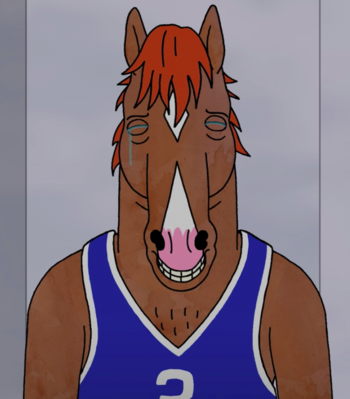 "You were born broken, that's your birthright.[...]
You're BoJack Horseman. There's no cure for that."
I burst into tears when I first saw this.
If you told me 2 years ago that an animated comedy starring Will Arnett would be the most moving, life affirming piece of media I've ever seen, I would have laughed right in your face.
— YouTube commenter on the final scene from season 2

BoJack Horseman has been praised for breaking the mold of animated comedies for adults... by breaking all of our hearts. Whether it be through exploring the nihilistic toxic tar-pit that is Hollywoo, or the nearly identical eponymous horse, there's no shortage of moments that'll (figuratively) rip your heart out. Needless to say, there is a reason it inspired the term "sadcom."

open/close all folders
Season 1
The BoJack Horseman Story, Chapter One

Fish Out Of Water

Best Thing That Ever Happened

What Time Is It Right Now?

The Dog Days Are Over

Head in the Clouds

A Horse Walks Into Rehab

A Little Uneven, Is All

The Kidney Stays in the Picture

The Face Of Depression

A Quick One, While He's Away

Xerox Of a Xerox

The View From Halfway Down

Nice While it Lasted