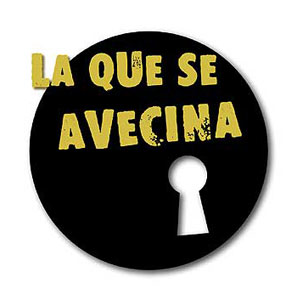 From the writers of another well known Spanish comedy series, Aquí no hay quien viva (Nobody Can Live Here) comes La Que Se Avecina (which could be translated to English as What's Yet to Come), a Slice of Life sitcom which happens in a new building called Viewpoint of Pinemountain (Mirador de Montepinar). A humorous series showing conflicts and everyday problems that face the inhabitants and workers of the building. The main characters at the start of the series are: an antisocial couple, Antonio and Berta; Enrique and his family which consists of his wife Araceli, their son Fran and Araceli's mother Charo; a newly married couple, Javi and Lola; Javi's pre-retired parents Goya and Vicente; the "annoying pest", Leo; the "Cuquis" and their three children; an antisocial defaulter; two squatters, Izascun and Maritere; two brothers, Sergio and Joaquín Arias; the porter Maxi and the gardener Coque, and some others.

In Season 2, Raquel's cousin Nines was introduced. From Season 3 onwards, every character from the first two seasons becomes a flanderized version of himself/herself. Sergio and Joaquín Arias, Cris, Araceli, Charo and other minor characters left the series, and new characters were introduced: Judith Becker, a psychologist in her thirties, and Estela Reynolds, who is Lola's eccentric mother and quickly becomes the series' main protagonist along with Antonio and Amador. At the end of Season 4, Maritere, Goya and Estela abandon the series. In Season 5, Araceli comes back with her girlfriend Reyes, one of the two new characters introduced that season, with the other one being Justi, Amador's mother. In Season 6, neither Reyes nor Justi reappear, but does Sergio Arias, who, however, doesn't stay in Season 7 and neither does Fran, Maxi nor Izascun. Fermín Trujillo, Lola's father, and Rebeca Ortiz, Judith's lawyer and friend, are the new characters introduced this season, although Fermín's first appearance was nearly the end of Season 6. Estela too reappears in the Season 6 finale and is a lead character in Season 7.

Other secondary characters that appear in the series include Parrales, Antonio's employee, Violeta, Antonio's schizophrenic sister, Alba, Antonio and Berta's daughter, "La Chusa", Coque's junkie ex-girlfriend, Judith's sister Ingrid and her husband Matthew, Berta's priest, the mayor and the director of "Internado Sangriento", among many others.