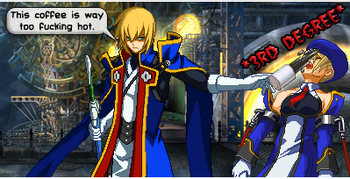 What makes them entertaining is the fact that you don't have to deal with them yourself in real life. Usually, the Rule of Funny enables the people around the person to be able to tolerate them. Sometimes, the Jerkass is the Plucky Comic Relief who's stepped off the beam and become The Scrappy, in which case the Rule of Funny fades away; they may be okay in the other characters' eyes, but the audience, not so much. Because of this, it's hard to feel sorry for them when something bad does happen to them, and it is often seen as comeuppance which will be applauded by the audience.

The single factor that pushes a merely annoying character over the line into full-time Jerkass status is their absolute obliviousness to other people's perceptions of them. Nothing they do ever strikes them as out of proportion; they never realize that anything they are doing might ever be considered inappropriate, excessive, or cruel; indeed, they believe they are actually right and everyone around them is in the wrong. If anyone ever does call them out on their Jerkassery, expect them to just rationalize it or shrug the accusation off. If the writers don't put it in check and just keep trying to one-up the character's assholishness, the character can deteriorate into The Sociopath. Often the result of Flanderization or Madden Into Misanthropy.

If absolutely everyone acts like this, you're looking at a World of Jerkass. If the character knows they're a jerk and revels in it, they're a Card-Carrying Jerkass. Hate Sinks, characters intended to be hated, are almost always Jerks of some kind.

On the off chance that something happens to nice-ify or remove the Jerkass, the other characters will be relieved at first, but will proclaim "We Want Our Jerk Back!" by episode's end. If the protagonist starts as a Jerkass and learns their lesson, it may be a Jerk-to-Nice-Guy Plot.

A Super-Trope to Jerk with a Heart of Gold and Jerk with a Heart of Jerk. See The Jerk Index for variations on different types of Jerks. Contrast with Innocently Insensitive, who acts like a jerk because they don't know any better, but will be quick to correct their behavior once it is pointed out to them. The inversion is Nice Guy, obviously. If you want to see the hero who is the Jerkass despite their good intentions, see Good Is Not Nice.

No Real Life Examples, Please! Needless to say, they are all too common in Real Life, and listing examples would cause trouble on the site.

Not to be confused with the reality stunt show Jackass.

Great! I bet enough worthless assholes somewhere finally wasted their useless time browsing every goddamn article on this page! Now get the fuck out of here and may all these bitch-ass punks never bring their bitch asses back!
Feedback

iPhone mocks the other phones for being less superior then him, and claims he'll always be the #1 phone.

iPhone mocks the other phones for being less superior then him, and claims he'll always be the #1 phone.