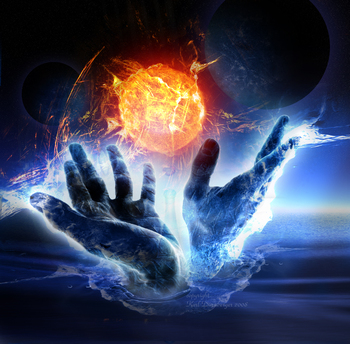 Got the whole multiverse in my hand.
"Everything is what I say it is! If I decide that granite is squeezably soft, it is! If I decide that cows have wings, they do! To put it another way, cows do not have wings because I don't want them to! My imagination and reality are virtually indistinguishable! All existence, except me, might as well be a figment of my imagination! Maybe it is! I might have just dreamed all this up, including wingless cows! But then, the whole point is that it makes no difference!"
— The Beyonder, Secret Wars II

Reality Warpers are capable of modifying the laws of causality around themselves, but take that to another level wherein there is no limit or range to their reality warp, extending to all of existence itself, and you have the Omnipotent: A character that is all-powerful. Either literally omnipotent, or are simply so powerful that they're virtually omnipotent within the context of the story.

There are several types of omnipotent characters.

The most powerful Reality Warpers, Cosmic Entities, and Eldritch Abominations tend to exhibit this, as does your typical Genie in a Bottle. Combine this with a strong Ego, and you get A God Am I (which may or not be completely true). Combine it with Cloudcuckoolander tendencies, and you may have a Great Gazoo, or worse, a Mad God.

Because of their powers, omnipotent characters usually have Complete Immortality. Nigh-Invulnerability in contrast is a step lower than this.

Compare The Omniscient and The Omnipresent, who often, but not always, overlap with this trope. If they don't actually do anything, they're an All-Powerful Bystander. When someone of this trope gets defeated, the one who defeated them is usually Even More Omnipotent. Did You Just Punch Out Cthulhu? could also be in effect.