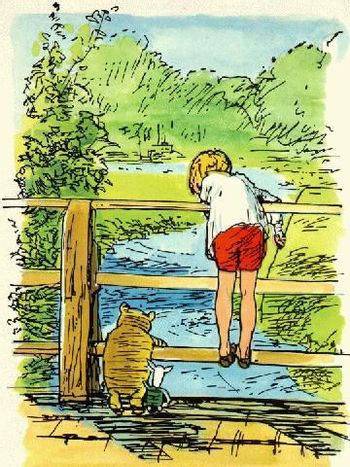 "Silly old bear."
"This could be the room of any small boy, but it just happens to belong to a boy named Christopher Robin. Like most small boys, Christopher Robin has toy animals to play with, and they all lived together in a wonderful world of make-believe. But his best friend is a bear called Winnie-the-Pooh — or, "Pooh" for short. Now Pooh had some very unusual adventures, and they all happened right here in the Hundred Acre Wood."
— Opening Narration for Disney's original Winnie the Pooh films.
Advertisement:

Winnie the Pooh is a media franchise based on the children's book Winnie the Pooh written in 1926 by author A. A. Milne and illustrated by E.H. Shepard.

A good example of Adaptation Displacement as a result of the cartoons based on it by Walt Disney, who produced three short featurettes in the 1960s (with music by the legendary Sherman Brothers) that were bundled together in one theatrical release and started one of Disney's most lucrative merchandise-driven franchises. In fact, Disney estimates that merchandise based on the Pooh characters brings in as much revenue as merchandise featuring the characters Mickey Mouse, Minnie Mouse, Donald Duck, Goofy, and Pluto combined. The characters got a regular TV series on Disney Channel, Welcome to Pooh Corner (1983-86) (also featuring music by the Shermans), which aired in reruns well into the 1990s, and the '90s also saw a revival of several new movies based on the franchise. Disney does not own the characters outright, so they must still credit A.A. Milne's estate every time they use an image or clip, or produce a film based on Winnie-the-Pooh.

Kenny Loggins gave the characters a Shout-Out in their hit song "House at Pooh Corner," originally recorded by the Nitty Gritty Dirt Band and later covered twice by Loggins (the second time retitled the song "Return to Pooh Corner" and added some new lyrics and guest vocals by Amy Grant). Loggins would later perform two songs featured in Pooh films, "Your Heart Will Lead You Home" (The Tigger Movie) and "Underneath the Same Sky" (Tigger & Pooh and a Musical Too, musical video version). Benjamin Hoff appropriated the characters for his Fiction Science (really, Fiction Theology) books The Tao of Pooh (1982) and The Te of Piglet (1992); Roger E. Allen did the same for his Fiction Business Administration books Winnie the Pooh on Management (1994), Winnie the Pooh on Problem Solving (1995), and Winnie the Pooh on Success (1997).

In 2009, an authorised sequel by other hands was published: Return to the Hundred Acre Wood by David Benedictus. A second sequel The Best Bear In All The World was published in 2016, this time a compilation of short stories by many leading authors. The same year another book Winnie the Pooh Meets the Queen by Jane Riordan was also published. Once There Was a Bear, also by Riordan, was published in 2022, and is a Prequel describing how Pooh first meets Christopher Robin and his other friends.

On January 1st, 2022, the first Winnie the Pooh book entered the US public domain, meaning that anyone in the US can now use Pooh and friends (aside from characters introduced in The House at Pooh Corner (which includes Tigger), which won't be added until 2024)note Only the versions seen in the books are in the US public domain, the Disney incarnations are still copyrighted and will remain so until the 2060s

Pooh, of course, has a Wiki, which you can find here

All but one were produced by Disney's DTV/television animation squad, but were theatrically released (as opposed to most DTVs) because of the franchise's popularity. However, they aren't part of the Disney Animated Canon.

There are also several direct-to-video movies that share canon with the movies above, though there are too many to list here; The Other Wiki has a more exhaustive list

Return to the Hundred Acre Wood:

The Best Bear in All the World

"So they went off together. But wherever they go, and whatever happens to them on the way, in that enchanted place on the top of the forest a little boy and his bear will always be playing."
Feedback

Example of:
Some Call Me "Tim"