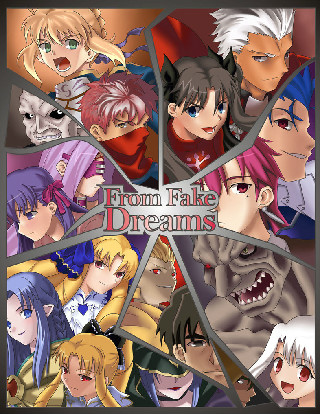 In the aftermath of the Fourth Holy Grail War, Emiya Kiritsugu was content to live out his final days with his newly adopted son Shirou. However, he found himself beset by strange dreams, dreams that told him the results of his incomplete training of Shirou's magecraft. As a result, he knew that he had to prepare for the future. For a Holy Grail War that was approaching fifty years early.

is a Fate/stay night Alternate Universe Fic written by Third Fang, author of the incredibly long Yet again, with a little extra help Fan Fic. The story follows the Magus Killer as he seeks to have Shirou properly trained in skills for the upcoming war, and then Shirou as he tries to make sense of the world of Magi he's been thrust deep into.

From Fake Dreams provides examples of: