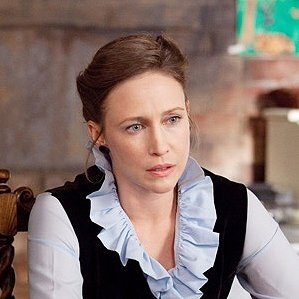 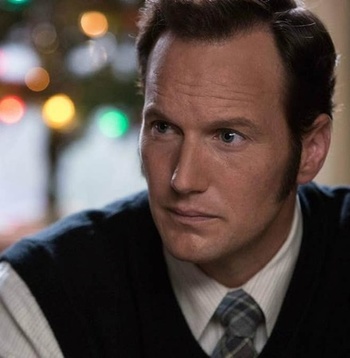 The daughter of Ed and Lorraine. 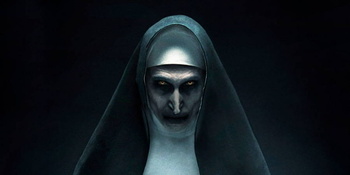 A powerful demon with a grudge against the Warrens.

A powerful demon who possesses a creepy doll.

The ghost of a Satanic witch who died centuries ago.

The ghost of Bill Wilkins, an old man who used to live in the Hodgsons' house.

Portrayed By: Marisol Ramirez
Appearances: The Curse of La Llorona

A ghostly spirit who was believed to have drowned her sons and was forever unable to pass on until she found them.

A supernatural entity who claims the lives and souls of those who do not pay its toll.

Portrayed By: Eugenie Bondurant
Appearances: The Conjuring: The Devil Made Me Do It

A sinister witch who is the mastermind behind the curse placed on the Glatzel family.

Advertisement:
Arne's Demon
Appearances: The Conjuring: The Devil Made Me Do It

The secondary antagonist of the eighth film in the Conjurverse. A demon that was summoned by the Occultist who us now trying to provide it with three human sacrifices to complete a curse.

A Rhode Island family who moves into a house haunted by a terrible evil.

A family from Enfield, England, whose family becomes haunted by a violent poltergeist.

The next-door neighbors to the Higgins family and Annabelle's targets.

A kindly dollmaker and his wife, the loss of their daughter sends them down a dark path.

A group of orphan girls who are taken in after their orphanage closes down.

A Catholic priest who acts as the Warrens' main contact with the Church.

An experienced exorcist in The '50s.

A parish priest in Los Angeles during The '60s and The '70s.

A nun who takes care of the girls of the St. Eustace Orphanage.

A young novice with psychic powers who assists Father Burke with his investigation of St. Cârța Abbey.

Portrayed By: Ingrid Bisu
Appearances: The Nun
One of the nuns at St. Carta Abbey.

A young French-Canadian living in a village near St. Cârța Abbey during The '50s.

Portrayed By: Raymond Cruz
Appearances: The Curse of La Llorona

A "curandero" and former Catholic priest who helps people deal with supernatural threats.

Played By: Simon McBurney
Appearances: The Conjuring II
A British paranormal investigator and friend of the Warren's.
Brad

Portrayed By: John Brotherton
Appearances: The Conjuring
The local police officer near the Perron home.
Kastner

Portrayed By: John Noble
Appearances: The Conjuring: The Devil Made Me Do It
A former priest who helps the Warrens in their investigation into Arne Johnson's case.