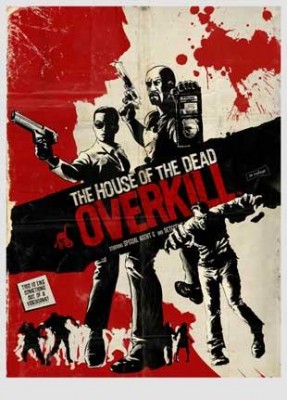 Isaac: Shit! I fuckin' hate these zom—
G: Mutants. How many times do I have to tell you to not use the Z word?
Advertisement:

OVERKILL is a prequel to the original House of the Dead series. It takes the unintentionally bad voice-acting the series is known for and runs with it, resulting in an over the top 1980 B-Movie vibe, heavily inspired by Quentin Tarantino's and Robert Rodriguez's double feature Grindhouse.

The plot of the game follows Agent G and reluctant partner Detective Isaac Washington. They're hunting down the deranged crime lord/pimp, Papa Caesar, fighting through the waves and waves of mutants he's unleashed. While they're tracking down Caesar, he causes the death of Varla Guns' brother, leading the hottest stripper on the Bayou City club scene to track down Caesar herself to take her revenge. She'll have to get in line though; as Washington wants to get revenge for the death of his father, also caused by Caesar.

Initially released exclusivity on the Wii in 2009, an Updated Re-release, the Extended Cut, was later released for the PlayStation 3 with PlayStation Move support in 2011. The Extended Cut features sharply improved graphics, new bonus weapons, and two levels not seen in the original Wii version, "Naked Terror" and "Creeping Flesh", which focus on Varla Guns' story.

A PC version followed just in time for Halloween 2013, as The Typing of the Dead: Overkill, including two play modes: the mode it's titled for, a follow up to the Cult Classic The Typing of the Dead released on the Dreamcast and PC as well as the Japan-only The Typing of the Dead 2 for PC, and another mode that essentially gives a straight PC port of the Extended Cut. This version also offered several purchasable dictionary DLCs which change the words needed to type with William Shakespeare, Filth and Love based dictionaries available. Eventually, the ability to import user-created dictionaries was added in March 2015. In addition House of the Dead: Overkill - The Lost Reels was released for iOS and Android devices on April 25, 2013.

They've come for tropes. You'll give them... examples:

Caesar: As you well know, Isaac, I enjoy TV Tropes. It's like a good Chinese dinner, you know, with the sweet and the sour. Expanding on that analogy, I will smile with delight—that's the sweet—as it ruins your fucking life—that's the sour. Ciao!
Feedback