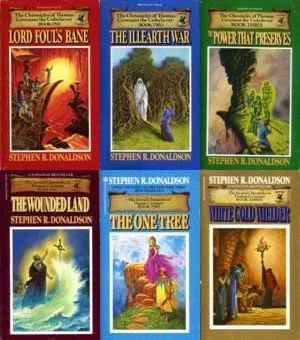 The Chronicles of Thomas Covenant is a fantasy series written by Stephen R. Donaldson that tends to lean far toward the cynical side of the Sliding Scale of Idealism vs. Cynicism.

Thomas Covenant, a bitter, divorced leper shunned by his community due to his illness, finds himself transported into a fantasy world called rather unintuitively "The Land" where the (good, nice, hospitable) people treat him as The Chosen One, tell him that the wedding ring he still hangs onto is a magical artifact of unparalleled power, and expect him to save the world. Covenant, however, refuses to play along, insisting that the fantasy world is All Just a Dream. It does not help that the highly competent main villain, Lord Foul, is usually several steps ahead of the good guys.

At first, Covenant is convinced that it is All Just a Dream. This does not really change, but he eventually decides that it is a dream he cares about. In the first three books, the author makes certain that the reader cannot decide whether or not it really IS a dream. The corruption of The Land could be a subconscious metaphor for Covenant's corruption by leprosy. It also seems suspicious that The Land is rather simplistically detailed for such a dark series — perhaps because it is All Just a Dream and the dreamer is not a fantasy writer. Oh, and it starts when Covenant is hit by a car and falls unconscious. On the other hand, it is far more vivid, lengthy, and elaborate than any dream should/could be.

The second trilogy more or less confirms that no, it is not All Just a Dream, by adding another main character who joins Covenant. What the Land actually is, however, is left up to the reader.

The series tends to have much more character-driven writing than other High Fantasy stories, and delves pretty deep into the psychology of its characters.

Following the clear and unambiguous information on the All Just a Dream question, the Chronicles have two own wikis, one serious

, one not so much and a bit detached from reality

The Chronicles of Thomas Covenant, the Unbeliever

The Second Chronicles of Thomas Covenant

The Last Chronicles of Thomas Covenant

The Chronicles Of Thomas Covenant provides examples of the following tropes: