Miniature cars created to help humanity and the Transformation Trinkets for this season, they assist Drive in his mission. They can move on their own by creating special tracks and each have unique abilities they can use to fight Roidmudes. Having a certain capacity for sentience, some of the Shift Cars are off on their own cases when not helping out Drive. By being used in conjunction with the Shift Brace, Shinnosuke can do a "Tire Exchange" and equip himself with new powers and weapons.
General Tropes
Type Change Cars

A new Shift Car based on Shift Tridoron which, when used by Heart with the Drive Driver and the Shift Brace, allows him to become Drive: Type Miracle. Exclusive to Kamen Rider Drive Saga: Kamen Rider Heart.
Tire Exchange Cars

Shift Max Flare is one of the three hotrods who are the first group of Tire Exchange Cars to appear in this series. During the Global Freeze Incident, the trio helped stopped the Roidmude's terror; for this case, Flare showcased its fire power as it leaved a trail of blaze surround one of the Roidmude, destroying its body. Flare can also give Kamen Rider Drive its ability in the form of Max Flare Tire. Mach can use Max as well, though the Mach Driver announces him as "Burn."

When Kamen Rider Drive battled Roidmude 027 as Type High-Speed, Flare followed suit and upgraded itself to help him fight.

One of the trio of hotrods that are the first to appear in this series, Shift Funky Spike helps stop the Roidmude's invasion by spewing spikes as a trap as well as a projectile. Spike also provides the Funky Spike Tyre for Kamen Rider Drive to defend himself with his new spiny sash as well as shoot out needles at his targets.

The last memeber of the trio of hotrods, Shift Midnight Shadow helps stop the Roidmude's first attack using its illusionary powers and shooting out miniature shurikens. By providing Kamen Rider Drive with the Midnight Shadow Tyre, it can let him duplicates its tyre to be used as shurikens or make copies of himself to confuse his oppoments. 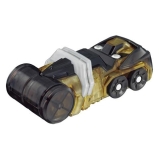 Circus first appeared with Go Shijima to help him introduce himself as Kamen Rider Mach. It can create special effects to make his introduction flashy.

Three special Shift Cars with formula bodies that are meant to be the crew for Shift Formula, keeping it ready for battle, as well as being Type Formula's equipment. The last gift to Rinna from Prof. Hendrickson, the plans for these Shift Cars came along with the needed information for the Trailer Cannon's completion.

A formula car/gas tank hybrid. Fuels Type Formula to keep it running properly, and as an added effect, the fuel manages to increase its already impressive speed.

A formula car/floor jack hybrid. Arms Drive with a wrist mounted jack that Drive can use as a weapon to push/smash foes away or into other things, like walls.

A formula car/combination wrench hybrid. Arms Drive with a wrist mounted wrench/claw weapon that can spin for greater damage and to act as a drill. However, Sparner is also able to take apart and repair Type Formula's armor and engine to make Shinnouske feel refreshed even after being strained from the g-forces when using Type Formula.
Trailer Cannon 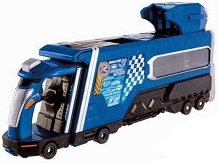 A massive Shift Car that can fire blasts from its headlights, as well as carry Shift Formula and other Shift Cars to the battlefield when Drive needs them. It is unique in that it is not to be slotted into the Shift Bracer to give Kamen Rider Drive its abilities. Instead, it can transform from Trailer Mode to Cannon Mode to be directly used as a powerful weapon when Drive is using Type Formula.
Advertisement:

Viral Cores are devices similar to the Shift Cars that are used by the Roidmudes to evolve them from their weaker Low-Class forms into their stronger Advanced forms. These come in three animal-based types that match the Roidmudes, Bat, Cobra, and Spider. In Chaser's case, he uses a trio of specialized Chaser Viral Cores that allow him to change into his Tune Chaser forms, arming him with a weapon specialized for each form. When 001 returns to the scene, he creates Neo Viral Cores, red-hued Viral Cores to allow a new branch of evolution to Roidmudes.
General Tropes
Chaser Viral Cores

A unique Viral Core created by Angel for Chase so that he would be able to fight after her Feather Circuit tampered with his programming to prevent him from becoming Kamen Rider Chaser.
Advertisement:

Miniature motorcycles used by Second Rider Kamen Rider Mach, as well as Kamen Rider Chaser. Like Drive, equipping them in the Mach Driver grants Mach different abilities through a "Signal Exchange". Like their Shift Car counterparts, each has a unique design, and each has a different Signal sign on their back tire. Unlike the Shift Cars however, each Bike is named for the specific signal that it represents.
General Tropes
Form Change Bikes

The primary Signal Bike of Go/Mach. It is used in the Mach Driver Honoh to transform the user into Kamen Rider Mach, and can be slotted into the Zenrinnote Front Wheel Shooter to activate a joint Full Throttle with the power of another Signal Bike. Is a near exact match of Mach's Rider Machine, the Ride Macher.

The primary Signal Bike of Chase/Chaser. It is used in the Mach Driver Honoh to transform the user into Kamen Rider Chaser, and can be slotted into a weapon like the Signal Axe to initiate its Full Throttle. Is a near exact match of Chase's Rider Machine, the Ride Chaser.
Signal Exchange Bikes

Initially introduced as a sole side car, it was only a Type Change Car in which Kamen Rider Drive can use to change his type into Dead Heat. This allows him to enter the Dead Zone state, allowing him to fight on-par with Heart Roidmude.
The Tridoron Key

The key to the Tridoron, which can summon said Cool Car to the user's location with the press of a button. Mr. Belt stored battle data in it regarding Drive's fights. When Shinnosuke failed to use Signal Chaser in Chase's Mach Driver, he did some quick thinking and used the Tridoron Key instead to transform into Type Super Dead Heat. Later, it is absorbed into Dark Drive's Driver, allowing Krim Steinbelt's mind to be restored into its AI.
Shift Ride Crosser
A new Shift Car/Signal Bike hybrid for Mach, exclusive to Kamen Rider Drive Saga: Kamen Rider Mach. It's based on the Ride Crosser, a unique combination of Gō's Ride Macher and Chase's Ride Chaser. It allows him to transform into Mach Chaser.