Polaris is a financially-independent dormitory situated on the main Totsuki campus. While most students have their own residences off-campus, Soma, Megumi and their friends live at the dorm for one reason or another, including Satoshi Isshiki (2nd Year, 91st Generation), Seventh Seat of the Council of Ten Masters. The dorm used to be very prestigious, but has gone into a decline until the present, when several of its residents, all freshmen from the 92nd Generation, make it to the qualifiers of the 43rd Autumn Election, with Megumi and Soma even reaching the quarterfinals and finals, respectively.
open/close all folders
General
Advertisement:
Soma Yukihira

Hailing from family-run local restaurant Yukihira, Soma immediately antagonizes his fellow 92nd Generation freshmen by bragging about using them as his stepping-stones to glory. Widely dismissed as a braggart transferee from a no-name diner, Soma gradually climbs up the ranks of his batch with his work experience, a steely resolve, and a willingness to experiment, all of which he learned from his father Joichiro, who he aspires to one day defeat to prove himself worthy of inheriting their restaurant.

Clumsy and shy Megumi left Tohoku unprepared for life in Totsuki, finding its competitive atmosphere totally at odds with her mellower approach to cooking, leaving her with a bad case of stage fright and poor grades, such that by the time she survives into tenth-grade (and even then she has the lowest passing score) she was only one failing grade away from expulsion. After surviving her first class upon being paired with Soma, however, she begins to look up to him as her greatest hope for helping her fulfill her dream of making her family and hometown proud.

Oldest student in the Polaris Dormitory, eleventh-grade Satoshi, from the 91st Generation, is also the Seventh Seat of the Council of Ten, an assembly of Totsuki's best student-chefs from all years and its highest policy board besides headmaster Senzaemon himself. Satoshi hails from a famous clan of cooks from Kyoto, who specialize in traditional Japanese cuisine. Unlike most of his peers, however, he knows great talent and tells them like he sees it, in particular taking a keen interest in Soma and Megumi, encouraging them to hone their skills even further.

Another freshman resident in the Polaris Dormitory, Shun's specialty is smoked food.

One of the three first-year girls from the dorm, Ryoko's specialty is shiokouji (preservatives and fermented ingredients), and spends months preparing them in the dorm basement.

Another of the three first-year girls at the Polaris Dormitory, Yuuki's forte is poultry and wild game (specifically, specially bred animals) and frequently uses a combination of different fat and meat.

Another Polaris freshman who comes off as physically weak and pathetic, Zenji happens to be the most educated of his batch, coming up with unique yet unorthodox dishes thanks to his extensive research.

The last two members of the Polaris Dormitory. Even though they appeared early in the series, their names were not mentioned in-story until the Stagiaire arc's finale. 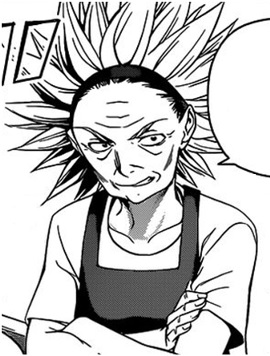 Housekeeper of the Polaris Dormitory.