This is a Character Sheet for Fatal Frame IV. 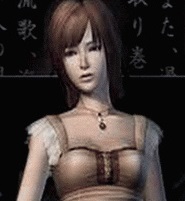 "The things that nobody remembers will eventually become things that never existed, right?"
The 17-year-old, soft-spoken protagonist of Fatal Frame IV. She was the last victim of the kidnapping incident and can't remember much about her time on Rougetsu Island. When she hears about the mysterious deaths of the other victims, she decides to return to the island to try and remember her childhood there, as well as to find out why so many people died.
Misaki Asou 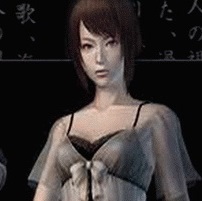 "Miya is special to me, and is always by my side."
A strong-willed girl who was kidnapped on Rougetsu Island as a child. Hearing that the other victims are dying mysteriously, she takes Madoka to their childhood place to recover her memories. She's a descendant of the Camera Obscura's inventor, Kunihiko Asou, and therefore inherited a strong sixth sense that leads to her spiritual connection with Sakuya.
Madoka Tsukimori 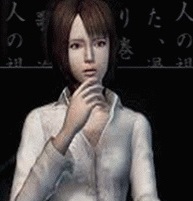 "...I can't remember...I don't want to remember! I have to find Misaki!"
A reserved girl who was one of the kidnapped victims. After the deaths of her friends, Marie and Tomoe, she was dragged along by Misaki to Rougetsu Island to uncover the truth. She ends up spirited away and reappears as a boss for Ruka and Misaki to fight.
Choushiro Kirishima 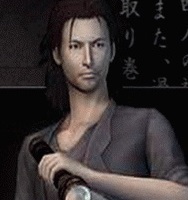 "There's no evidence that Haibara crossed to the island, so headquarters can't do anything... The search will continue in Tokyo. But, Haibara... I have a feeling he is still on the island. Even if it's just my intuition..."
Ex-police officer turned detective. He discovered the five abducted girls in a cave beneath Haibara Hospital and has been chasing the perpetrator, You Haibara, ever since. Unlike other playable characters, he uses a device called the Spirit Stone Flashlight to fight ghosts. 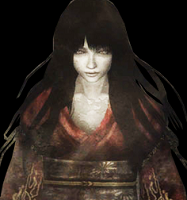 "This... is this the last sound I'll hear?"
The main antagonist of Fatal Frame IV. Her father and brother tried to cure her disease by making her dance in an ancient ritual, the Kiraigou, wearing the eponymous Mask of the Lunar Eclipse, so she could cure the Getsuyuu Syndrome "outbreak" plaguing the island. The ceremony failed, so she now wanders the island inflicting death on all who look at her.
You Haibara 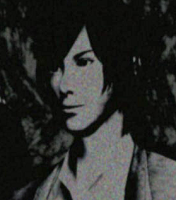 "My sister will wake up. One day, for sure."
Sakuya's brother, and a doctor at Haibara Hospital. For the sake of his sister, he conducted cruel experiments and killed many people. He helped kidnap the five girls for the ceremony, and tried to recreate it to cure Sakuya's illness.
Doctor Shigeto Haibara 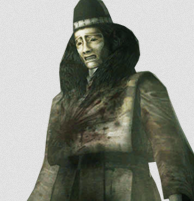 "The lunar eclipse occurs once every 10 years. This opportunity to perform it again must not escape. ...We have no time."
The director of Haibara Hospital, and father to Sakuya and You. In the past, his family were ceremony masters and practitioners for the island, and his obsession with curing his daughter led to him forcing her to perform the forbidden ritual, with him as the figurehead and organizer as per family tradition.
Sayaka Minazuki 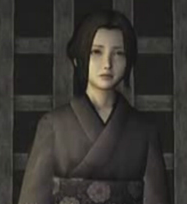 "Someday when Ruka's cured, I'll see her smile..."
Ruka's mother, who took her away from the island after the incident 10 years ago. She is in poor health, and asked Kirishima to look for her daughter. 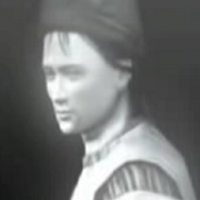 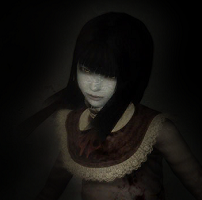 "That nurse came again today, to tell me I was too noisy. When I made a little cut and pulled the scissors back, she gave an ugly howl. I hated her ugly insides."
An important patient at Haibara Hospital, hinted to be the daughter of Sakuya and You Haibara. She was a cruel and sadistic girl, often bullying Madoka or the nurses through psychopathic, violent means.

Tsubaki Tono
"I came to this island upon my uncle's recommendation. Although I was scared at first, I'm very grateful now."
A beautiful nurse from the Mainland. She was well-loved for her kind nature, and asked to play the role of the Vessel/Utsuwa in the island's celebratory festival, the Rougestu Kagura. During her performance, the failure of Sakuya's ritual happening simultaneously caused her to die on the spot, in front of all the attending guests.
Kageri Sendou & Watashi 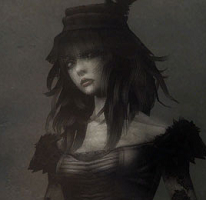 "Don't touch "me"...!"
A young woman from a wealthy family hospitalized at Haibara Hospital. After losing her twin sister who she was obsessed over, she created a life-sized doll modeled after her as a substitute and believed it to be alive, taking her around the island on a wheelchair. On the Day Without Suffering, Kageri looked at Sakuya's Blooming face and, beginning to suffer from it herself, chartered her doll around the island until she died.
Her ghost now walks the corridors of Haibara Hospital with her doll in tow... which actually is alive, now.
Yuukou Magaki
"I was born! I was born!"
A patient at Haibara Hospital, going by what is presumably an alias. He was a wealthy painter, making many financial and artistic contributions to the hospital prior to his illness. On the Day Without Suffering, he watched Sakuya parade around the island and spreading the Blooming, openly embracing his death, satisfied that he painted the event due to a "vision" he had some time before.
Shoji Katagiri
"Please, investigate this hospital as soon as possible."
The assistant director at Haibara Hospital and a doctor under Shigeto Haibara's employ. He was worried about the increasingly inhumane practices his boss conducted to cure Getsuyuu Syndrome and somewhat skeptical of the more supernatural methods, but soon grew enticed by the prospect of witnessing the Kiraigou and its effects on the patients. During that time, he was also the one who heard the voices of the kidnapped girls coming from a well and notified the authorities in the mainland, resulting in Kirishima investigating the case and saving the girls when he went there.

Presumably he died during the Day Without Suffering, and now his ghost wanders the halls of the hospital.

Fuyuko Shiratsuki
"That girl..."
A nurse at Rougetsu Hall, charged with overseeing the 2nd floor wards, meaning she was also in charge of Ayako and was a constant victim of her aggression. The most experienced nurse in the building, she died during the Day Without Suffering.
Shie Sonosaki
"When she opens her eyes, and opens that door... I know the world will collapse..."
A nurse previously in charge of Rougetsu Hall's fourth floor, Sakuya Haibara's ward. She was extremely frightened by her and, after a while, asked to be changed to another ward with seemingly no response from the director. After the failed Kiraigou and nurse Tsubaki Tono's death, Shie was moved to the basement to continue watch over Sakuya and also took over Tsubaki's duty as nurse for the third floor ward. Her fear of Sakuya had her constantly on edge, even as she was in a limbo state of being, and Shie had the dreadful feeling that once she left the room, it would spell destruction for them.

On the Day Without Suffering, Shie watched Sakuya open the basement door and leave the basement, Blooming and dying in the process.

Takashi & Iori Aiba
Takashi: "I did come to the island to visit, but... A black mask..."
Siblings that traveled to the island to study Dr. Asou's work, and fell ill after attending the tourist Kagura festival. Takashi Aiba was an old college friend of Choushiro, and hoped to set him up with his sister Iori, but both ended up succumbing to the disease.
Kazuto Amaki
"Give it back!"
A patient at Rougetsu Hall, suffering from Getsuyuu Syndrome. A young boy with a habit of stealing things and taking them to his room, he was a constant handful towards the staff. Died during the Day Without Suffering.
Shrine Guards

A group of masked men and women serving the Haibara Family, natives to Rougetsu Island, tasked with watching over the basement levels of the island and its cave systems to prevent intruders from entering the Shrine of Mourning, as well as charged with carrying out the Face-Cutting Ritual in cases of Blooming. Four of them were present during the attempt to resurrect the Kiraigou ceremony, and all four were subsequently killed when Sakuya began the Day Without Suffering, cornering each of them in the caverns.

Himiko Kiriya & Yuuzou Takemura
Himiko: "I forgot something... No, I feel like I can't remember anything..."
A pair of inpatients at Rougetsu Hall. Both were chosen to undergo experimental treatment for Getsuyuu Syndrome, involving horrific-looking devices that were placed forcefully on their heads for brain surgery purposes. The surgeries only served to kill them faster, speeding up their Blooming.
Asagi Hizuki
"Are you sick too?"
A very young girl committed to Haibara Hospital, with a severe case of Getsuyuu Syndrome. She died as a result of Dr. Haibara's experiments.
Takahisa Kouzuki
"You cannot escape!"
An apprentice mask-maker under Souya Yomotsuki, living in the Yomotsuki House at the island to better learn the tricks of his trade. It's unknown how he died, but his hostile ghost attacks Ruka through the story.
Yoriko Sonohara
"I will leave this world, with the few memories I have left."
The first ghost fought in the game. Having gone through an extensive period of traumas, Sonohara was taken into Rougetsu Hall for treatment of Getsutyuu Syndrome. As she started to forget her family due to her condition worsening, she hanged herself in her room. Her ghost now haunts the corridors and is first met by Madoka at the Kunihiko Asou Museum.
Tadayuki Kaido
"Repeating..."
A man visiting Rougetsu Island from the mainland. He contracted the Getsuyuu Syndrome during his visit and subsequently died from Blooming while under the hospital's care.
Tomoko Hinuma
"It's too cold..."
A patient suffering from Getsuyuu Syndrome that killed herself by falling into the pool at the Courtyard.
Natsuki Shiono
"Welcome home..."
A patient who waited for her lover to return and visit her during her hospitalization, but he never came.
Kyouko Kitazume

A patient whose treatment had her be hanged upside down at the ceiling of a punishment room in the basement of Haibara Hospital. When the Day Without Suffering came, she was abandoned in the chaos and died while still upside down.

A patient at Rougetsu Hall suffering from Getsuyuu Syndrome. Succumbed to Blooming.

Inpatient suffering from the syndrome. By the time of the Day Without Suffering, his Budding was so severe he couldn't even recognize his own face.

The five "Kanade" that participated in the Rougetsu Kagura for the tourists during the night of the Kiraigou. When Sakuya's ceremony failed, Tsubaki's dance also ended in tragedy as both her and the Kanade collapsed. It eventually resulted in their deaths, causing them to haunt the Lunar Eclipse Hall where they once performed.