This is a Character Sheet for Fatal Frame III. 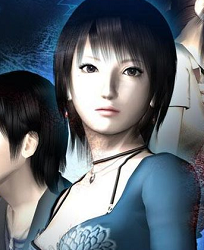 "I have to find Yuu... I have to find him and be sure... Yuu... I..."
The main protagonist. Rei lost her fiancé, Yuu Asou, in a car accident some time before the events of the game. While investigating a supposedly-haunted building, she sees what appears to be her dead fiancé, and follows him deeper into the structure. She finds herself entering the Manor of Sleep, dragged there by her grief and guilt. Now afflicted with the Tattooed Curse, Rei wanders the manor in the hope of finding and catching up to Yuu and break the curse before it consumes her.
Miku Hinasaki
See the character sheet for Fatal Frame.
Kei Amakura 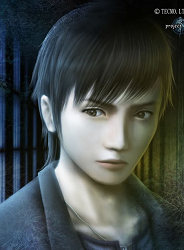 "We have to save Mio and Miku too! We can't give up yet!"
Mio Amakura's uncle, a non-fiction writer. He was also good friends with Yuu and Mafuyu, and wrote several letters to him during the course of the game, which Rei receives. These help her unravel the mystery of the Manor of Sleep. The main reason he is investigating the manor is to save his niece Mio, who fell victim to the Tattooed Curse.
Yuu Asou 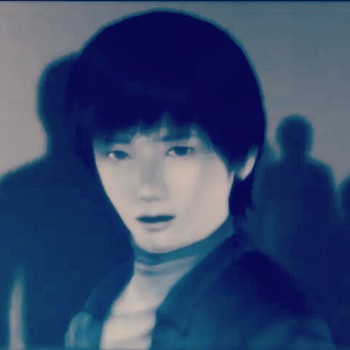 "As long as you go on living, a part of me will continue to live on."
Rei's fiancé, killed in a car accident while she was driving. The guilt over his death leads her to follow him into the Manor of Sleep. In life, he was an old friend of Mafuyu Hinasaki and Kei Amakura. 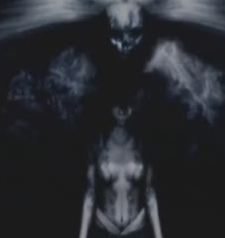 "I don't want to see anymore..."
The Tattooed Priestess, Fatal Frame III's main antagonist and possibly the biggest malevolent-yet-sorrowful ghost maiden in the series. Like Kirie, she was a Virgin Sacrifice for a ritual that, because of a secret romance and a string of tragic events, led to said ritual failing once she became the sacrifice for it.

Reika is an incredibly dangerous spirit that haunts the Manor of Sleep and its real-life counterpart, spreading the Tattooed Curse onto those who feel guilty of surviving major disasters. 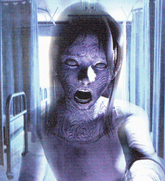 "I didn't want to survive!"
A woman who survived a fatal plane crash that killed her family and fiancé. She was admitted into the hospital for treatment of her injuries, but her survivor's guilt allowed her to fall prey to the Tattooed Curse and slowly sinking deeper into madness and depression, believing she sees the spirits of her loved ones tormenting her. Rei meets her while exploring the Manor of Sleep, discovering that she suffers from the same Holly tattoos she's bearing, and Yoshino begs her to wake her up from the dream. Rei does find her at the hospital, but by that point it's too late and the curse consumes her while Rei can only watch in horror, making Yoshino one of the "Lost Patients".

Yoshino becomes a ghost that haunts the Manor of Sleep, usually flanked by Black Shadows that attack the player while she either cowers in the corner or prepares to attack you herself.
Amane Kuze

"Save the two..."
A Handmaiden in the service of the Kuze Shrine, tasked with caring for the Tattooed Priestess and carrying out the Impalement Ritual. She helped her older brother Kaname sneak into the manor to meet with Reika, which led to the Unleashing. For disobeying the Kuze Code, she was killed by the other Handmaidens, staked to the bottom of the Abyss. Her spirit aids Miku, guiding her through the manor.
Kaname Ototsuki 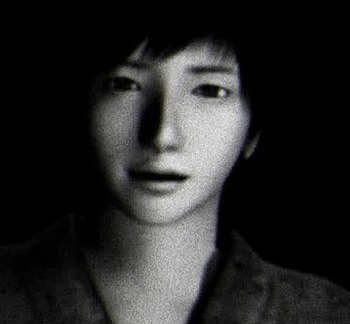 "I must go back...to the Manor, I've got to see Reika."
The son of Kyouka and Akito, smuggled out of Kuze Manor as a baby. He fell in love with Reika at the village she lived in, and was drawn to the manor by dreams of her. His sister, Amane, helped him sneak into the shrine to see Reika, and his death before her eyes was the trigger for Reika's curse. 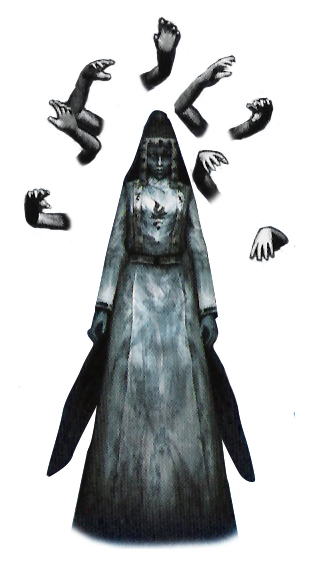 "Prepare for the Rite of Commandment. It's time to impale the priestess..."
The Head of the Kuze family, mother to Kyouka, and grandmother to Kaname and Amane. She had no mercy for those that broke the Kuze Code, ruthlessly killing anyone she considered a threat. Upon carrying out the ritual, she discovered Kaname's involvement and attempt to see Reika again and killed him before her eyes. The image caused the ritual to fail and the Unleashing to occur, with Yashuu taking the full brunt of the Rift in the Chamber of Thorns. While she did survive that, she ended up tattooed herself and with little time left to contain the Rift from spreading, using every available resource. But it wasn't enough and she soon succumbed to the Rift's influence.

Yashuu haunts the Manor of Sleep trying to stop the events that led to the Unleashing. Her ghost is violent and attacks the protagonists at several points in the plot. 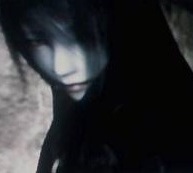 "I won't let you go...!"
The daughter of Yashuu Kuze, and mother to both Kaname and Amane. She was an extremely beautiful woman, and fell in love with a man that came to the manor for the winter. After his disappearance, she waited for him to return while obsessively brushing her hair. After her death from the Rift consuming the manor, her spirit continues to wait and mistakes Kei for her long-lost love.
The Handmaidens 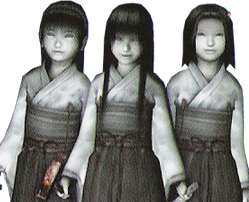 Shigure: "Stay here... Forever."
Handmaidens in the service of the Kuze Shrine, working alongside Amane. They served the Priestess, and were tasked with impaling her in the shrine. After the curse broke out, they killed Amane and were themselves sacrificed to try to seal the Rift, which also failed. Their ghosts now seek the Manor for victims of the curse to impale.

Tengai Narumi
"It must not be spread. The Unleashing cannot be allowed to continue."
Head of the Shrine Carpenters serving under the Kuze Family for generations, specialized in creating mythical constructions for rituals and other eventualities, wearing a full-concealing mask. When the Unleashing occurred, Yashuu Kuze tasked Tengai and his team of carpenters to seal the Kuze Shrine and make sure the Rift wouldn't escape it, along with expanding the Manor and sealing off other areas so Reika wouldn't wander off its limits and, finally, cast it off into the dream realm, none of which worked all that well. As a last resort, he hesitantly decided to have his team of 10 carpenters become Sacrificial Pillars to strengthen the foundations of the new Manor, chasing after the ones who escaped with a meat cleaver, before finally sacrificing himself as the final Pillar.

It still wasn't enough, and his ghost now haunts the Manor of Sleep, attacking the victims of the Tattooed Curse, thinking more sacrifices will seal off the Rift.

The carpenters serving under Tengai Narumi, all young men at the top of their ranks in building shrines, temples and other mythical locations. A team of 10 including Tengai himself served under the Kuze clan when the Unleashing happened, before they were assigned to expand the Manor rooms and cast the Shrine into a cave, far away from the sunlight, and into the dream realm. As a last resort, they were tasked with being made into Sacrificial Pillars, but many refused and tried to run away. Four carpenters, belonging to the Moriya family and whose bodies were corrupted by the Rift, aided Tengai with making sure none of them escaped, ambushing them at certain rooms and killing them, then killing themselves to become seals for the Shrine Courtyard.

Despite the bloodshed, the Rift was still tainting the manor, and the Carpenters' spirits were all dragged into the Manor of Sleep, where they attack any victims of the curse.

Tropes applying to the Carpenters in general

Tropes applying to the Moriya carpenters

A mother and daughter duo that appear to Rei in the Manor of Sleep. In life, their husband/father went to get the child's ball that fell on the roof of their home, but slipped and fell to his death. Kozue blamed herself but didn't tell her mother, while Makie knew of his death but lied to her daughter that he just "vanished", carrying out frutiless searches in the forest to try and "find" him. One day, a neighbor went to check on them, since they hadn't left home for days themselves, but only found black soot marks on their beds.

Both fell victim to the Tattooed Curse and now haunt the Manor of Sleep as ghosts, looking for their husband/father. They attack Rei in a misguided attempt to shift the blame and sorrow they feel.

Kiriko Asanuma
"It's so dark... Let me out! Please let me out!"
A young woman whose family was killed by robbers that broke into her home, managing to avoid death by hiding in the closet. Despite this, she grew increasingly isolated until authorities had to remove her from the house and hospitalize her, as she was growing increasingly weaker.

Asanuma was suffering from the Tattooed Curse and became one of the Lost Patients, having succumbed to the tattoos. Her ghost now haunts the Manor of Sleep's crawlspaces, crawling underneath the floor as she tries in vain to find a way out.

A pair of master tattoo artists, summoned to the Kuze Shrine to tend to the Priestess, taking part in the Rite of Spirits to have their eyes gouged out to see the Priestess' dreams without sight, and needles driven into their arms to carry the pain into the ink. They made the sacred ink for the tattoos and ritually engraved them into the Priestess's body. As part of their duties, they were forbidden from leaving the shrine, staying fully within proximity of the Abyss. Once their duties were over, their arms were cut off and cast away.

Two Engravers served Yashuu Kuze for Reika's ritual, presumably succumbing to the Rift themselves once the ritual failed.

Stroller Grandma
"Come here..."
The ghost of an elderly woman pushing a stroller. Little is known about her, but the Ghost List explains that she was unable to accept the death of her infant grandchild, so she dug up the body from the grave in secrecy and put it on the stroller to cart it around. The fact she felt immense grief over the loss of a loved one indicates she might have died to the Tattooed Curse, but this isn't stated.
Black Shadows

Featureless black spirits that attached themselves to Yoshino Takigawa, seemingly berating her for surviving the plane crash. You fight an entire horde of them whenever Yoshino herself fights you.

Voiced by: Lusia Strus (US)

"I'll give my body over to the ropes and seal the gates."
A former Rope Shrine Maiden from the Himuro Mansion sacrificed to seal the Hell Gate, appearing in Miku's dream after she was affected by the Tattooed Curse. She represents the horrors of the Strangling Ritual and haunts the Himuro areas of the Manor of Sleep.
The Kusabi

An outsider to Minakami Village sacrificed in the Hidden Ceremony to appease the Hellish Abyss, appearing in Kei's dream after Mio passed the Tattooed Curse to him. It represents the Crimson Sacrifice Ritual and haunts the Minakami areas of the Manor of Sleep.