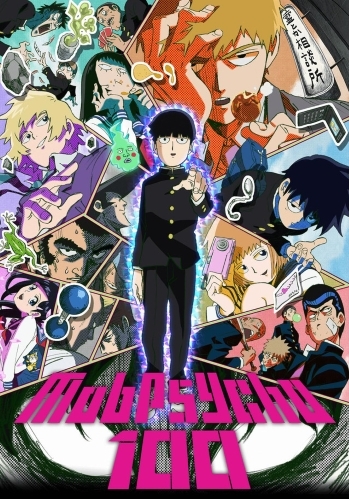 Get ready, wake your psyche up, Mob!
Get ready, dig your anger up, Mob!
"Listen. Just because you have psychic powers doesn't make you any less human. It's the same with fast people, people who are book smart, and people with strong body odor. Psychic powers are just another characteristic. You must embrace that as a part of yourself and live positively. The truth behind one's charm is kindness. Become a good person. That is all."
— Arataka Reigen
Advertisement:

Mob Psycho 100 is a Japanese webcomic created by ONE, the author responsible for One-Punch Man. It began publication on Weekly Shōnen Sunday Web Comics on April 18, 2012, and ended at Chapter 101 in December 2017.

Shigeo Kageyama, nicknamed "Mob", is a 14-year-old boy attending his second year at Salt Middle School. He tries to lead an ordinary life, despite having been born with telekinesis. As he undergoes the turmoil of adolescence, the suppressed emotions grow inside Mob little by little, and his emotion-fueled power threatens to spill over its bounds.

On December 1, 2015, an anime adaptation by Studio Bones was announced for release, which premiered July 11, 2016. Said adaptation is directed by Yuzuru Tachikawa, written by Hiroshi Seko and its music composed by Kenji Kawai. It's licensed by Crunchyroll and distributed by Funimation as part of their partnership deal. The simuldub, produced by Bang Zoom! Entertainment, premiered on Funimation's site on December 11, 2016. The anime also received a Compilation Movie focused on Reigen's point of view, titled Mob Psycho 100 Reigen ~Shirarezaru Kiseki Reinōryokusha~, which premiered in March 2018, followed by an announcement of the anime receiving a second season, which premiere in January 2019. Adult Swim's Toonami block announced they would begin airing the show on October 27th, 2018.

2018 saw to the release of a Reigen-focused Spinoff title, also titled Reigen, that ran on the Shogakukan Manga ONE app. The spinoff is also complete with seven chapters and one volume.

An OVA, Mob Psycho 100: The Spirits and Such Consultation Office's First Company Outing ~A Healing Trip that Warms the Heart~ was released on September 25, 2019.

On May 12, 2022, Studio BONES announced an October 2022 release date for the long-awaited third season.