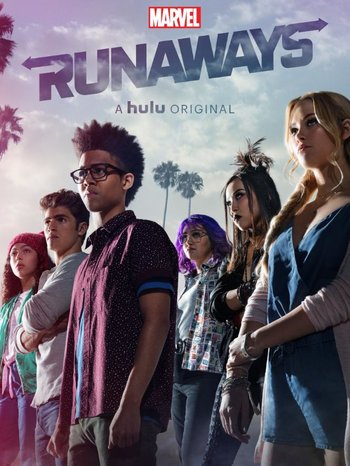 Molly: Why would our parents do all these horrible things?
Gert: I guess 'cause they're horrible people.
— "Kingdom"
Advertisement:

Runaways is a 2017 superhero Teen Drama airing on Hulu (and later, Disney+), based on the Marvel Comics series of the same name. Like many other shows produced by Marvel Television, it's set within the expansive Marvel Cinematic Universe, alongside ABC's Agents of S.H.I.E.L.D. and the Defenders franchise on Netflix. Josh Schwartz (The O.C.) and Stephanie Savage (Gossip Girl) are the showrunners and executive producers.

The series focuses on six very different teens who only have one thing in common — their parents are literally evil. As members of the secret conspiracy/cult "The Pride", their parents engage in a yearly human sacrifice and are working towards a more nebulous ultimate goal. Deciding to team-up and stop them, the teens struggle to learn as much as they can and blow the operation wide open.

Not to be confused with rock band The Runaways, nor the film based on them.

Shortly before the first Season Finale dropped, it was confirmed that the show was renewed for a second season.

It was then released, all at once, on December 21, 2018. A third season was announced in March 2019, and premiered on December 13th. It was later announced the same year that Runaways would be crossing over with Cloak and Dagger in a season three episode, marking the first instance of a crossover between two Marvel Television series on different networks.

On November 18, 2019, it was announced the third season was going to be its final one.

Nico: What do we do?
Alex: We run.
Feedback